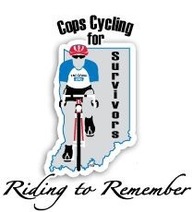 Indianapolis, IN- Monday July 9, 2018, is the start of the 17th annual Cops Cycling for Survivors bicycle ride across Indiana. A departure ceremony will be held at 8:30 a.m. EDT at the Police and Fire Fighters Memorial located at the southeast corner of the Indiana Government Center North Building on the State Capitol grounds in downtown Indianapolis. Indiana U.S. Senator Joe Donnelly and Sarah and Laura Barrett, survivors of fallen Indiana State Police Trooper Daniel Barrett, will be speaking at the event.

A 9:00 a.m. departure from the memorial will take the cyclists south to the Southport Police Department where they will meet with Lt. Aaron Allan’s family, friends, and co-workers to honor and remember his ultimate sacrifice on July 20, 2017. During the 13 day nearly 1,000 mile ride honoring Indiana’s fallen police officer’s and their families the cyclists will also visit the survivors of Sgt. Joseph Cox Jr., Allen County Sheriff’s Office, whose end of watch was February 12, 2017.  Indiana’s First Lady, Janet Holcomb, is scheduled to join the ride during the last day.

The Cops Cycling for Survivors Foundation, Inc. annual bike ride consists of active and retired police officers, survivors, family members and friends of law enforcement riding their bicycles around the perimeter of Indiana to raise funds and awareness of the sacrifices made by Hoosier law enforcement families across Indiana. Funds raised from this event are used to perpetuate the memories of officers killed in the line-of-duty and to aid surviving family members and co-workers of officers killed in the line-of-duty. Previously raised funds have been directly donated to foundations, scholarships and camps in memory of fallen officers and to provide immediate financial assistance following a line of duty death.

The ride will conclude the afternoon of Saturday July 21, 2018, at Crown Hill Cemetery Heroes of Public Safety Section.  The closing ceremony will begin at 2:00 p.m. EDT.  Survivors and family members of fallen Monroe County Sheriff’s Office Deputy Sarah Haylett-Jones, end of watch October 19, 2008, will provide the closing message. Everyone is welcome and encouraged to attend.

The general route of the ride will be as follows:

For more information about the organization, donations made, or this year’s ride, visit their website: http://www.copscycling4survivors.org/