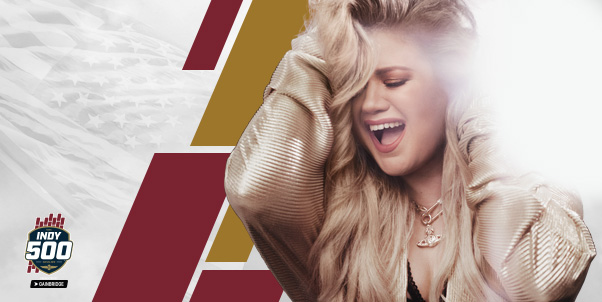 INDIANAPOLIS, – Multiple Grammy Award-winning superstar Kelly Clarkson will perform the national anthem before the start of the 103rd Indianapolis 500 presented by Gainbridge on Sunday, May 26 at the Indianapolis Motor Speedway.

Clarkson will sing on Race Day in the traditional spot before the 33 drivers are called to their cars in front of the largest single-day spectator sporting event crowd in the world. The performance will take place on the heels of the Tuesday, May 21 season 16 finale of NBC’s “The Voice,” where Clarkson serves as a coach on the hit show.

Clarkson, a native of Fort Worth, Texas, first rose to fame in 2002 as the winner of the inaugural season of “American Idol.” She has grown to become one of the most popular artists of any era, with 18 singles boasting multi-platinum, platinum and gold certifications around the world and total worldwide sales of more than 25 million albums and 36 million singles. Clarkson also is the first artist to top each of Billboard’s pop, adult contemporary, country and dance charts.

Clarkson is quickly becoming a familiar and celebrated figure at the world’s most famous racetrack. This will be the second consecutive year and third time overall Clarkson has performed the anthem before the Indianapolis 500, as she also sang in 2011 with Seal while accompanied on piano by David Foster.

“It’s a pleasure to welcome Kelly back to IMS on Race Day to sing the national anthem for hundreds of thousands of fans in the stands and millions of viewers around the world,” IMS President J. Douglas Boles said. “She is a global icon and an incredible singer, and our fans have loved her performances of the anthem last year and in 2011. We look forward to her delivering another stirring, poignant rendition just before engines are fired for ‘The Greatest Spectacle in Racing.'”

Clarkson has released eight studio albums and one greatest hits album. Her most recent album and first for Atlantic Records is the Grammy-nominated “Meaning of Life.” She also has written two children’s books, including the New York Times Top 10 best-seller “River Rose and the Magical Lullaby.”

Along with her role on “The Voice”, Clarkson hosted the Billboard Music Awards for a second consecutive year and voiced the character of Moxy in STXFilms’ “UglyDolls” in 2019. Clarkson also is scheduled to make her daytime debut with her talk show, “The Kelly Clarkson Show,” airing in September 2019 on NBC.

Visit IMS.com to purchase tickets for the 103rd Indianapolis 500 presented by Gainbridge on Sunday, May 26 and for more information on the complete Month or May schedule at IMS.

The race will be televised live on NBC for the first time, with the event’s iconic pre-race show starting at 11 a.m. (ET).