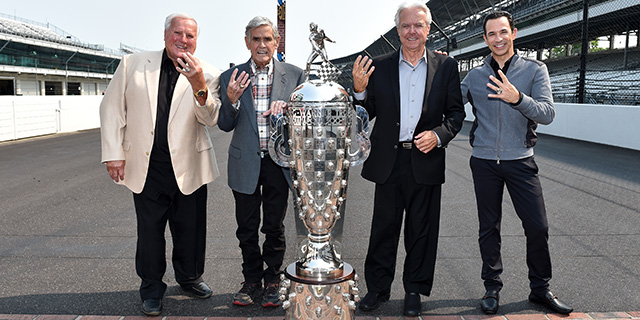 INDIANAPOLIS – Television coverage of the Month of May at Indianapolis Motor Speedway will shift into high gear Saturday, May 14 when NBC debuts “Pennzoil presents The Club,” a documentary featuring an exclusive conversation among one of the most elite groups in global motorsports — the four drivers to win the Indianapolis 500 four times.

Airing at 2 p.m. (ET), “Pennzoil presents The Club” will lead into live coverage at 3 p.m. that afternoon of the GMR Grand Prix NTT INDYCAR SERIES race on the IMS road course.

A trailer is available here.

Helio Castroneves became the fourth member of the most exclusive club in motorsports last May 30. Castroneves will aim for his record-breaking fifth “500” victory in the 106th Indianapolis 500 presented by Gainbridge on Sunday, May 29, also live starting at 11 a.m. (ET) on NBC.

“This is a truly once-in-a-lifetime chance to watch and discuss sports history,” IMS President J. Douglas Boles said. “For fans around the globe, it’s an epic way to start the Month of May on NBC before tuning in to the GMR Grand Prix and Helio’s historic ‘drive for five’ on Indy 500 Race Day.”

Shortly after Castroneves’ emotional victory for Meyer Shank Racing in the 105th Running of the Indianapolis 500 presented by Gainbridge, Boles called for a secret meeting of Castroneves and his fellow four-time winners, A.J. Foyt, Al Unser and Rick Mears.

On July 21, 2021, the four legendary INDYCAR SERIES drivers gathered to commemorate one of the most significant accomplishments in motorsports history. Penske Entertainment was on hand to capture and document the moment, recording a conversation 110 years in the making.

“Pennzoil presents The Club” is a documentary celebrating that conversation and what it means to win “The Greatest Spectacle in Racing” four times. The show features a sit-down conversation in downtown Indianapolis, historic race footage and a four-time winner’s meeting at the world-famous Yard of Bricks with the Borg-Warner Trophy.

“It’s still hard for me to believe that I am a part of this group of drivers – these are drivers that I have looked up to and watched all my life and to now be standing on the same level as them is incredible. My best memories have come from winning the Indianapolis 500, there is no other race in history that has that same feeling; the feeling of a month’s long hard work all coming to an end in the best way possible,” said Castroneves. “I will forever be grateful for the people who have helped me achieve such a monumental accomplishment because it was not just me, it was a team effort each of those four years.”