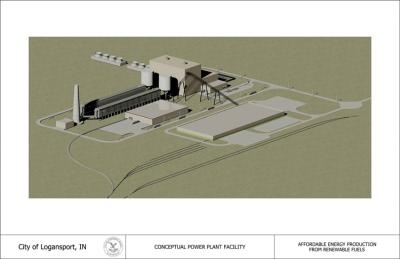 Last Updated on April 6, 2015 by cassnetwork

Some of Logansport’s elected officials have promised hundreds of jobs, hundreds of millions of dollars in private investments and lower electric rates as part of a “rate stabilization initiative” introduced in November 2012. Despite failed negotiations with two companies, they say they’ll keep trying. At a meeting tonight,the council voted unanimously to terminate the purchase power agreement and development agreement with Logansport Energy Group LLC.

In November 2012, the city and LMU requested proposals from companies who could build a new power plant powered by “refuse-derived fuel” instead of coal and paid consultants to analyze the proposals and make a recommendation. The consultants recommended a Florida-based company called Pyrolyzer LLC and the mayor spent a year negotiating with that company.

In April 2014, the mayor and LMU superintendent said that Pyrolyzer was officially out of the picture and the Logansport City Council and LMU’s Utility Service Board signed an agreement to buy electricity from a yet-to-be formed company called Total Concept Solutions (TCS) Logansport Energy Group LLC. A development agreement was also approved, but it was all contingent upon the company writing the city a check for $1.75 million by March 31, 2015.

City officials called it a “franchise fee” and said it would recoup the money the city had spent pursuing the project.

On March 31, Mayor Ted Franklin said in a press release that a deal with TCS Logansport Energy Group hadn’t been reached, but outlined four more options to provide LMU with electricity to sell its customers when LMU’s electric generating plant is closed later this year. Three of the options include repowering the existing generating plant and tripling its capacity; the other option is for LMU to buy all of the electricity it sells under long-term electric rate agreements.

The project has met with opposition and criticism from some, with one local citizen unsuccessfully taking a lawsuit all the way to the Indiana Supreme Court.

Currently, LMU makes some of its electricity and buys the rest from Duke Energy. It then sells that electricity to LMU customers. LMU’s existing electric generating facility on Race Street is currently scheduled to close this October and that is likely to result in some LMU generating plant employees losing their jobs.

LMU has a contract to purchase its electricity from Duke Energy through Dec. 31, 2018, and must notify Duke of its future plans beyond that by Dec. 31, 2016.

Mayor Ted Franklin told the council tonight that he expects to issue a joint press release tomorrow with another group of investors.