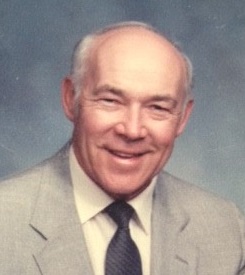 Jim graduated from Wabash High School in 1946. He lettered in three sports at Wabash, football, basketball, and track, and he received the Gridiron Medal Award for student athlete his senior year. He then headed to Earlham College in Richmond, Indiana where he graduated with honors in physical education and was a four year varsity letter winner in both football and basketball, and ran track for one year. He was captain of the football team and won MVP his senior year. He also won the E.P. Trueblood Award for outstanding scholar/athlete at Earlham in 1950.

Jim began his teaching and coaching career in Wabash, Indiana in 1950. From 1950-1954 he taught general science at Wabash Jr. High and coached Jr. High and freshman basketball as well as being varsity assistant in football and track. From 1954-1957 he taught physical education at Wabash High School and coached varsity basketball and continued assisting in football and track. In 1957 he earned a Master’s Degree from Ball State University. Jim then moved his family to Logansport in 1957 where he taught physical education and was head basketball coach there until 1969. He took Logansport to the Final Four in 1959 and 1961, won 11 sectionals, 6 regionals, and two semi states.

Jones coached basketball at IU Kokomo from 1969-1972 and then returned to Logansport High as Athletic Director in 1972 until he retired in 1991. During this time he initiated and implemented a girls’ program in nine sports and planned and coordinated physical education and athletic facilities for the new high school that was built. He was named North Central Conference coach of the year in 1958 and 1961 and Indiana High School Athletic Director of the Year in 1978. He was awarded the Charles Maas Distinguished Service Award in 1991.

Funeral service will be at 11:00 a.m. Saturday, May 9, 2015, at Calvary Presbyterian Church, 701 Spencer Street, Logansport, with a luncheon to follow at the church. Rev. Chuck Compton will officiate the service.

Interment will be at 3:00 p.m. Saturday at Falls Cemetery, Wabash.

Memorial contributions may be made to The Michael J. Fox Foundation, Donation Processing, PO Box 5014 Hagerstown, MD 21741-5014, (www.michaeljfox.org) in honor of his battle with Parkinson’s Disease, Logansport High School Athletic Department, Calvary Presbyterian Church, 701 Spencer St., Logansport, IN 46947 or a

donation of your choice.

Condolences and personal remembrances may be left online at www.kroegerfuneralhome.com.