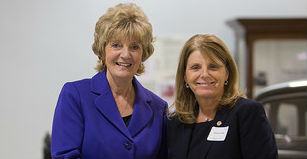 Two area educators were honored for their commitment to excellence in education during Tuesday’s 2015 Commencement Luncheon. The recipients are Michele Starkey, superintendent of the Logansport Community School Corporation; and Marilyn Skinner, executive director of Kokomo’s Very Early Childhood Education Center.

Sciame-Giesecke said both education leaders play a role in one of IU Kokomo’s missions, to increase educational attainment in north central Indiana. Starkey has implemented programs to introduce Logansport students to the idea of going to college while they are in middle school, and to prepare students for the rigors of college.

Skinner leads efforts to educate parents as their children’s first teachers, equipping them with resources so their children enter kindergarten ready to succeed.

“We are celebrating two individuals who have dedicated their careers and lives to education,” Sciame-Giesecke said.

Starkey describes herself as a “home grown Berry,” as a Logansport High School graduate who has spent her entire career with the Logansport schools. She began her career teaching second graders, and moved up, serving as a school counselor, assistant principal, principal, and curriculum director, before being appointed superintendent in 2011.

Under her leadership, the Logansport schools have focused on college and career readiness, with initiatives that include bringing all eighth graders and English language learners to IU Kokomo for tours, so they can see the college opportunity available in their own community.

Sciame-Giesecke has now shared that idea with other area superintendents.

“That has been so successful because of Michele’s leadership,” she said. “We are one step closer to being sure every child in the region is introduced to college. She is deeply committed to helping students find their pathway in life, whatever that may be.”

Starkey gave credit to the leaders and teachers in her school corporation for her success.

“This is all about the team I work with,” she said. “We look out for what will help our kids to be successful when they leave us.”

Skinner has spent her decades-long career serving children, first as an elementary school teacher, then as an administrator in the Kokomo School Corporation. After she retired from the schools, she readily admits that she flunked retirement, going back to work as an adjunct faculty member at IU Kokomo, supervising student teachers for multiple universities, and helping found the Early Childhood Education Center with a $1.5 million Lilly Endowment Grant.

“Marilyn coined the phrase ‘Parents are a child’s first teacher,’ said Sciame-Giesecke. “The center has positively impacted the lives of children in Howard County and beyond.”

Skinner said the center was founded because community members were concerned that children were coming to kindergarten unprepared to learn, and quickly fell behind.

“We decided giving parents the education and resources to teach their children was key to our success,” she said. “I accept this on behalf of those who have worked hard to make our program as successful as it has been. I am honored to receive it.”

The Chancellor’s Medallion is awarded to those who have provided exemplary service to IU Kokomo. Kokomo Opalescent Glass creates the awards from crimson-colored glass, etched with the image of the campus Well House.