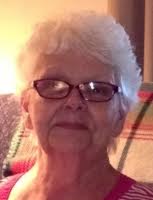 Born May 28, 1939, in Morristown, Tennessee, she was the daughter of the late James Luther Hawk and Darcus Ruth (Coakley) Hawk.

On November 16, 1985, in the Pisgah Christian Church, she married Lonnie Jenkins, who survives.
Barbara was a 1957 graduate of Carmel High School. She was retired from Switches/Federal Mogul.
As a member of the Fletchers Lake United Methodist Church, Barbara was active in the church women’s circle. She enjoyed quilting, cross-stitching and needlework. Barbara was an excellent cook and was known for her specialty dessert, “banana pudding.” It was simply the best.

She was preceded in death by one brother, Donald Hawk and one step-son, David Jenkins.

Visitation hours will be from 4- 8 p.m. Wednesday, June 3rd and one hour prior to the service Thursday in the funeral chapel.

Memorial contributions may be made to the American Cancer Society or the South Bend Memorial Hospital Foundation.

You may share memories and condolences in her guestbook and view her video tribute at www.fisherfuneralchapel.com