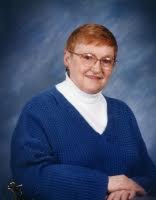 Born June 11, 1931, in Riverhead, New York, she was the daughter of the late George and Gertrude Thompson Hepworth. On September 15, 1976, in St. Albans, Vermont, she married Lloyd “Skip” Perry, who survives.

Edith received her Masters degree in Speech Pathology from the University of Vermont. She was retired from Logansport School Corporation where she had worked as a speech pathologist for 20 years.

As a member of the River of Life Christian Church, Edith had served as a church elder and served on several committees in the past. She was an avid doll collector. Edith took pride in making dolls from porcelain castings and hand-making the dolls’ clothing. For several years, Edith ran a doll hospital in her basement where she repaired broken dolls. She really enjoyed riding with Lloyd on their Harley Davidson motorcycle. She enjoyed planning and taking vacations with her husband.

She was preceded in death by her parents, daughter, Patricia DeForge and brother, Charles Hepworth.

Visitation hours will be from 4- 8 p.m. Sunday, June 14th in the funeral chapel.

Memorial contributions may be made to the River of Life Christian Church.

You may share memories and condolences in her guestbook www.fisherfuneralchapel.com