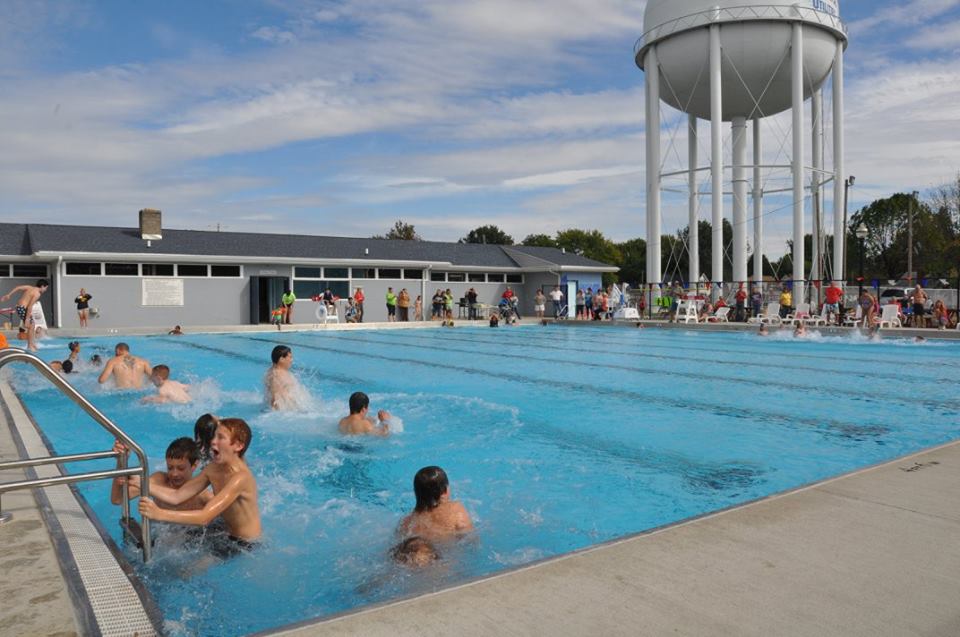 Last Updated on September 26, 2015 by cassnetwork

The fact that the calendar said September 26 and the temperature was in the mid-70s didn’t deter dozens of kids who braved the cold water to be first into Logansport’s newly renovated municipal pool.

Last year, the pool was slated for demolition after it closed for the season. Losing millions of gallons of water and in dire need of renovations and updates, it just didn’t seem to be a priority for the city administration, or for the ones that had come before it. Plans had been drawn up for a new multi-million dollar aquatic center, but the money just wasn’t there.

In January, Mayor Ted Franklin carried a color photo from the pool’s opening day on August 17, 1955 to a luncheon where he spoke to members of the League of Women Voters of Cass County. Later that week, in his State of the City address, he announced that he planned to ask the Logansport City Council for funding to renovate the pool.

Franklin wanted a re-dedication ceremony to happen on August 17, sixty years to the day after the pool had first opened, but the day came and went.

In fact, on Sunday, August 16, Franklin quietly declared a state of emergency so that he could drive a city dump truck to work on the pool.

Finally, on Monday, Sept. 21, the announcement came — a re-dedication ceremony was scheduled for Saturday, Sept. 26.

Franklin said he estimated it cost about $450 to fill the pool with water, but it provided a chance to “test” the facility before a grand opening next summer.

During Saturday‘s dedication ceremony, Lucy Burns presented the city council and parks board members with a check for $31,255.50 raised through a matching grant opportunity provided by the Cass County Community Foundation.

Franklin invited Jim Muehlhausen to unveil a color photo of Muehlhausen’s grandfather, George, who served as the city’s mayor from 1948-1955 and, according to the city’s website, is credited with “the leadership  needed to fund and construct” the pool in 1955.

The park in which the pool resides is officially known as Muehlhausen Park, though it’s more commonly known as “Tower Park” because of the water tower that sits just south of the pool.

The size of the pool was reduced, but a new waterslide was constructed and a splash pad outside provides a new feature that can be used after hours. Home Depot is providing funding for a pavilion that will be located just west of the splash pad. Ocean and rainforest murals were painted by students from Logansport and Lewis Cass on the interior and exterior of the bathhouse.

Saturday’s dedication ceremony lasted about 40 minutes as Franklin and Randall Miller were among those who thanked the community for its contributions to the project.

Those in attendance were treated to hot dogs, pizza, Pepsi, chips, cookies and other items donated by local businesses.

About two dozen kids jumped into the pool and quickly discovered it was much colder than they had expected, but that didn’t stop them. Franklin changed into a wet suit and joined them for a trek down the water slide. For a few hours on the first weekend in fall, it was summer again in Logansport.

Franklin said the pool will be open from 1-5 p.m. Sunday, Sept. 27 with free admission.

“The remainder of the ‘season’ will be dependent on weather forecast and staffing,” he said.