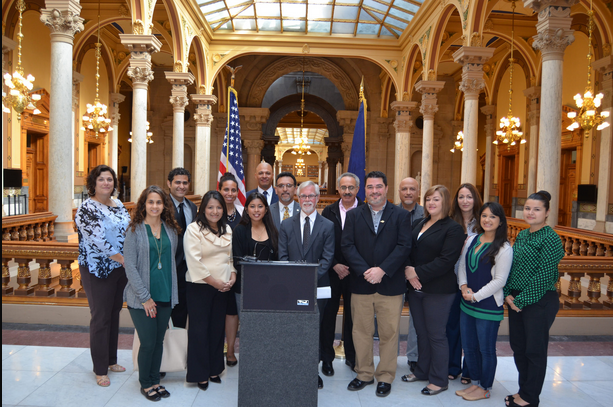 Last Updated on September 21, 2015 by cassnetwork

INDIANAPOLIS—Indiana Senate Democratic Leader Tim Lanane (D-Anderson) along with the Senate Democratic Caucus released a package of initiatives aimed at strengthening education, public safety, and access to healthcare for Latino families across the state.

Ideas for these proposals are the result of a working group of Latino community leaders, established by Senate Democrats in 2013. The Indiana Senate Democratic Latino Roundtable is comprised of various leaders from education, health care, and the private sector and meets monthly during legislative session and bi-monthly during the interim.

To provide more affordable tuition to college students State Senator Earline Rogers (D-Gary) will once again author a proposal to allow undocumented students attending Indiana high schools to attain resident tuition rates at certain colleges and universities. Many students, brought to Indiana through no fault of their own, have participated in Indiana’s education system for years only to be denied the resident tuition rates to assist in their ability to attain higher learning.

“It was difficult to see my friends make their college choice and to know I didn’t have options,” said Ms. Preciado. “In-state tuition would help me finish my physics and mechanical engineering major and be able to contribute to Indiana’s economy because Indiana has been home for 15 years.”

If a student has attended an Indiana high school for at least three years, registers as an entering student at or is currently enrolled in a state educational institution not earlier than the fall semester of the 2016-2017 academic year and graduated from a Indiana high school or received an equivalent Indiana high school diploma, the student would receive the resident tuition rate.

“This is a small but significant step toward bettering these students’ future and fueling Indiana’s economic success,” said Lanane. “These students just want an opportunity to succeed.”

To ensure the safety of all Hoosier motorists, a Senate Democratic proposal will provide protections that prevent undocumented drivers from taking to the road without the financial means necessary to operate a vehicle as required by law. Currently, ten states and the District of Columbia have enacted laws to allow undocumented immigrants to obtain a driver’s license.

By licensing undocumented Hoosiers, more drivers will be insured lowering car insurance premiums for all motorists. Currently, if an accident occurs, motorists with insurance have to cover the cost of repairing their own vehicle. The cost and risk of uninsured drivers is then passed on to the insured in the form of higher premiums.  Through this measure, Senate Democrats hope to license more Hoosiers to provide for increased accountability on the road and lower insurance costs. The initiative also includes language specifically barring any license issued to be used as federal identification.

A particularly jarring issue brought to light through meetings of the Senate Democratic Latino Roundtable surrounds the lack of dialysis care within the community. While the United States offers near-full coverage for End Stage Renal Disease, undocumented immigrants are the only subset of patients not covered. Federal law gives states the flexibility to create guidelines for eligibility for Emergency Medicaid in an outpatient setting, however Indiana has adopted a near-death-only strategy. This has resulted in disparities within treatment, which rack up expensive Emergency Room and Intensive Care Unit costs that are passed on to other consumers.

To combat this issue, Senate Democrats propose a North Carolina based initiative where outpatient dialysis is covered by Emergency Medicaid, noting that the treatment in itself is a form of life support for these patients.