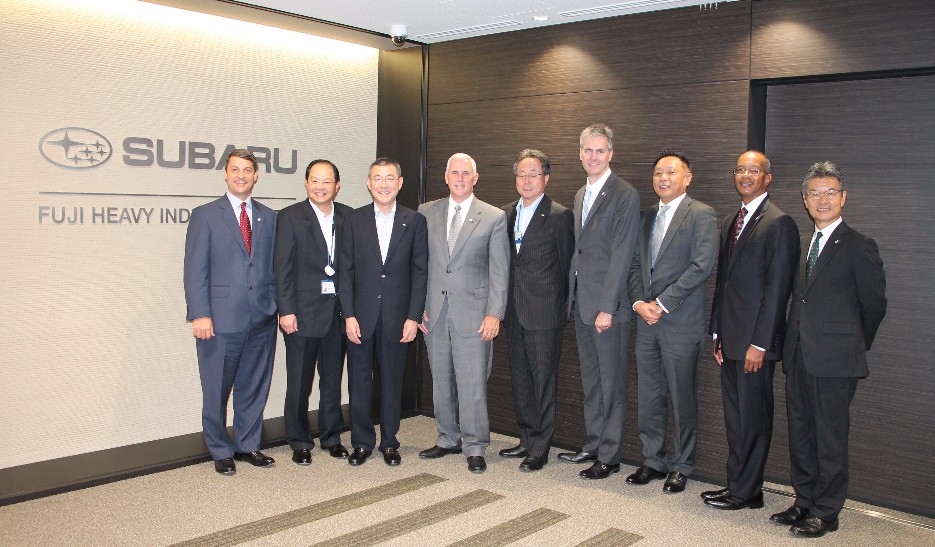 Last Updated on September 21, 2015 by cassnetwork Governor Mike Pence joined executives from Subaru of Indiana Automotive (SIA) today as the company announced plans to significantly expand its operations here, creating up to 1,204 new jobs by 2017.

“Last week’s meetings with government leaders and business executives across Japan have strengthened our economic ties with companies operating in Indiana and sparked momentum for job creation in the Hoosier State,” said Pence. “Subaru chose Indiana as the home for its only assembly plant outside Japan, and now the company is choosing Indiana once more. Last week, executives at Subaru’s parent company told us they are choosing to locate 1,200 new jobs in Indiana because of the long-term relationships we’ve developed and the business climate we’ve built, two things that we’ll keep doing to make sure Indiana remains a state that works.”

SIA will invest $140.2 million to increase its production capacity by nearly 100,000 units annually. The company will upgrade its existing campus at 5500 State Road 38 East and purchase new machinery and equipment in order to support the expansion and meet the growing demand for Subaru vehicles in North America. Established in 1987, SIA is a wholly-owned subsidiary of Japan-based Fuji Heavy Industries Ltd. and is one of only three Subaru assembly plants worldwide. SIA, which builds the Subaru Outback, Subaru Legacy and Toyota Camry, is Subaru’s only production facility located outside Japan.

“SIA associates do an outstanding job of building superior quality into every vehicle, which has helped propel the Subaru brand to tremendous success in the North American market. SIA’s investment of approximately $140 million and the creation of over 1,000 new jobs at SIA over the next two years will enable SIA to build more Subarus to help meet the growing demand,” said Tom Easterday, executive vice president of SIA. “The substantial increase in production volume at SIA will also result in new jobs and investment by many of our suppliers across Indiana. We greatly appreciate the support of state and local government for this significant economic development project.”

This news comes on the heels of Governor Pence’s recent jobs and economic development mission to Japan last week, where he met with the president of Fuji Heavy Industries in Tokyo. SIA’s investment will be in addition to its $400 million expansion currently underway, which was announced in May 2013, dedicated to a new paint shop and an expansion of the engine assembly and stamping sections to enable SIA to begin Subaru Impreza production by the end of 2016.

SIA currently employs more than 3,800 Hoosiers and produces approximately 300,000 cars each year. The facility has built more than 4 million vehicles, including more than 2 million Subarus, since the start of production in 1989. The company’s expansion is also expected to spur growth of its direct material suppliers as well, including 28 located across Indiana.

“This news marks yet another significant investment in our growing community,” said Lafayette Mayor Tony Roswarski. “It’s a testament to our skilled workforce, positive business environment, quality of life and the company’s confidence in continued success here.”

The Indiana Economic Development Corporation offered Subaru of Indiana Automotive up to $7,650,000 in conditional tax credits and up to $250,000 in training grants based on the company’s job creation plans. These incentives are performance-based, meaning until Hoosiers are hired, the company is not eligible to claim incentives. The city of Lafayette and Tippecanoe County will consider additional incentives at the request of the Greater Lafayette Commerce.

“From the plans to build that were announced almost three decades ago to today’s word that new jobs and expanded production are ahead, Tippecanoe County has eagerly welcomed every step,” said Tippecanoe County Commissioner Tom Murtaugh. “We are grateful to be called home by this leading automaker.”

Indiana’s economic ties with Japan continue to grow. Among all U.S. states, Indiana has the largest amount of Japanese investment per capita and is home to more than 250 Japanese business facilities that employ more than 52,000 associates. Indiana is the only U.S. state that is home to three Japanese original equipment manufacturer (OEM) automotive companies, including Subaru.