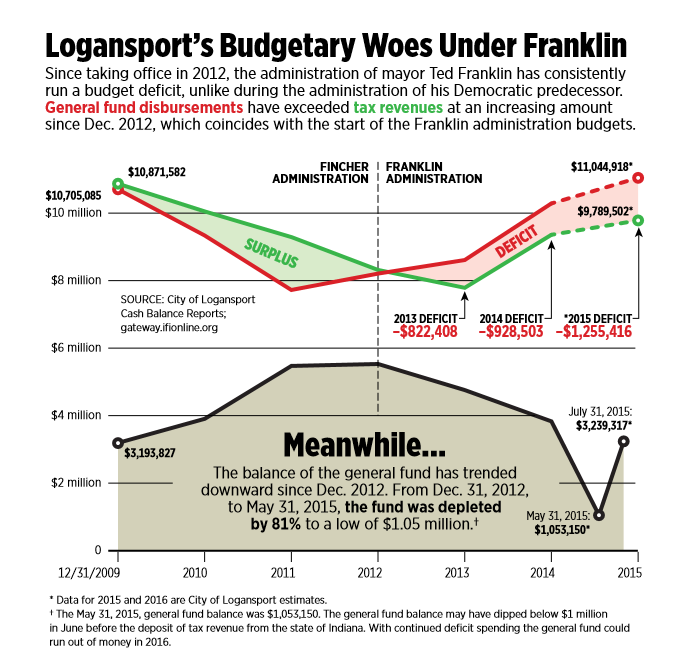 Last Updated on October 31, 2015 by cassnetwork

An analysis of the City of Logansport’s General Fund during the past three years has revealed that Mayor Ted Franklin and the city council have deflated the cash balance by 81 percent.

Based on information released by the city, an analysis by 1st Ward Council Candidate David Morris and illustrated by At-Large Candidate Kevin Burkett indicates the mayor and council approved spending that has increasingly drawn down the General Fund annually each year for the past three years. In sum, the mayor and council approved slightly more than $3 million in spending more than what the city generated in its general fund tax rate.

“This is proof that the current rate of spending with the administration and council is simply not sustainable,” Democratic mayoral candidate Dave Kitchell said. “The spending has increased, even at a time when the mayor is proud to say that a consultant enabled him to secure $12 million in additional funding. We have no 18th Street reconstruction project to show for it though we had it all but funded when this term began, and we have no fiscal plan for renovating and operating the Cass County Memorial Center, which is a marquis building in the city.”

Kitchell said Franklin acquired the center from the county, but has no plan for maintaining or improving the building or a funding source.

“What has exacerbated this situation is the lack of accountability in detailing city expenditures, increased spending for economic development that resulted from a city/county split, and stalled progress on the sale of the Logansport Mall that forced an Illinois bank to order to cease and desist his interference with a purchase agreement. The mall represents a significant part of our tax base, and the mayor is preventing it from becoming a revenue producer for the city again.”

The current council majority has not shown sound fiscal management of the city’s tax dollars, Kitchell said, and it’s time to rein in spending to reasonable levels that will not send out the wrong message to potential industries and investors who will judge us by the way we manage our money, as well as bond rating companies who may lower our rating based on our fiscal record.

“Taxpayers deserve to know not only where people stand on the issues, but what the big picture of our finances is. Unfortunately, the trend lines for deficit spending in the city are heading the wrong way.”

Kitchell said the candidacy of Clerk-Treasurer Stacy Cox, an MBA who is an assistant controller, will be an asset in restoring fiscal sanity to the city. In addition, council members like Morris, Burkett, Terry Doran, Scott Peattie, Amy Densborn, Larry Hood and Carl McPherson collectively bring life experiences that will restrain city spending and end deficit spending in the city.