Last Updated on November 6, 2015 by cassnetwork 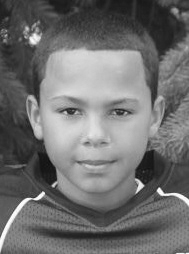 Rey C. Burrage III, 15 of Logansport, passed away Tuesday, November 3, 2015 at Logansport Memorial Hospital.
Born on October 16, 2000 in Logansport, he was the son of Reyornes C. Burrage Jr. and Maggie Michael.

Lil Rey had a smile that would light up the darkness. He had a great love for his family and friends, and never knew a stranger, welcoming everyone with a handshake and a hug.  He was quick to make others laugh, had a memory like no other, and he never forgot anything.  He loved being the center of attention and never felt uncomfortable in the spotlight. Rey had a great passion for singing and playing video games. His greatest passion was sports. He loved baseball, football, and basketball. A sports ball of any type in his hand was very natural to him.  Rey played for different teams including, Logansport Babe Ruth, Logansport Youth League , Cass County Youth Football and his school teams. His favorite professional teams were the Chicago Bears, Chicago White Sox, Chicago Bulls, and the Golden State Warriors.  His favorite player was Stephen Curry. Some would say that Lil Rey actually thought he was Stephen Curry when he took the court. Rey was so active and full of energy from morning until night. His ultimate love, passion, and desire was to be with the ones who loved him.  Rey always wanted to be surrounded with family and friends. When he would talk to you he would always leave the conversation at a point to begin it again for the next time he would see you. “The day which we fear as our last, is but the birthday of eternity.” – Lucius Annaeus Seneca

Visitation will take place from 10:00 AM until the time of service also at McHale Performing Arts Center.