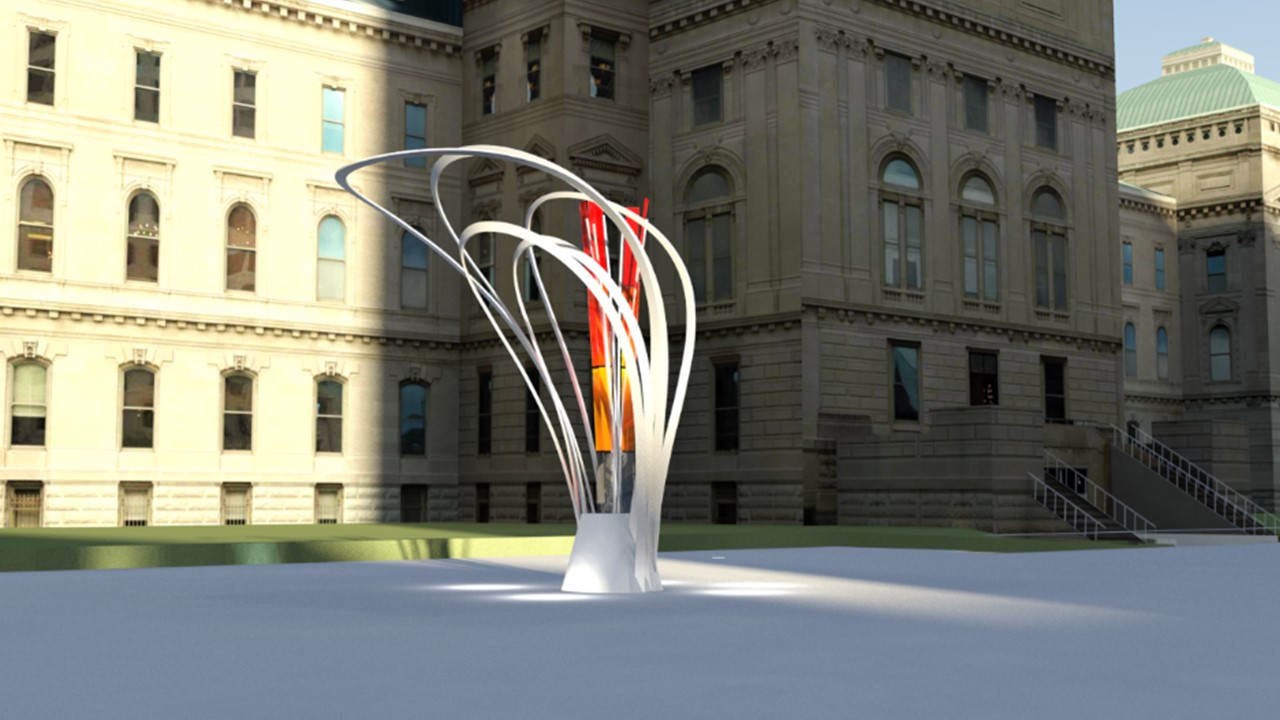 Last Updated on December 13, 2015 by cassnetwork

INDIANAPOLIS – In commemoration of the 200th anniversary of Indiana’s statehood, the Indiana Department of Administration, in conjunction with the Indiana Arts Commission, announced today the winning bids for centerpiece sculptures for the Indiana Bicentennial Plaza.

The projects calls for the installation of two art pieces within the Plaza, located at the intersection of Robert D. Orr Plaza and Senate Avenue on the grounds of the Indiana Government Center complex. The first sculpture is called Enduring Flame, and will be located at the north end of the plaza, and the second sculpture, Living Time Capsule, will be installed near the south end.

Following a nationwide call for artists and submissions of 104 proposals, the selection committee awarded the creation of the Enduring Flame sculpture to New York artist Osman Akan, and the Living Time Capsule piece to Dale Enochs from Bloomington, Indiana.

Akan, whose wife is from Indiana, has been featured in the New York Times, Trendsetter Magazine and Sculpture Magazine. His work integrates natural and artificial light, utilizing reflective and refractive qualities of various materials and creative perspective points.  Enochs is an internationally known artist, best known for his talent as a limestone sculpture. Enochs has previously designed and sculpted various public works throughout Indiana, including a spherical, limestone sculpture outside the Governor’s Residence.

Enduring Flame symbolizes the torch of the Indiana flag and will incorporate the torch’s flame and its rays, as well as the 19 stars that represent Indiana’s place at the 19th state admitted to the Union.  Living Time Capsule will incorporate three main elements – a dwarf tulip poplar, a limestone square from Indiana and its major waterways carved into the upper face of the stone, and a polished stainless steel ring standing 21 feet tall.

“Both sculptures speak to Indiana’s rich heritage and provide a robust investment to the State of Indiana,” said IDOA Commissioner Jessica Robertson. “Our state is fortunate to have such talent contribute to the Statehouse grounds for visitors to enjoy.”

The Plaza construction work currently underway is expected to be completed by October 2016, and installation of the two art pieces is anticipated for July 30, 2016.