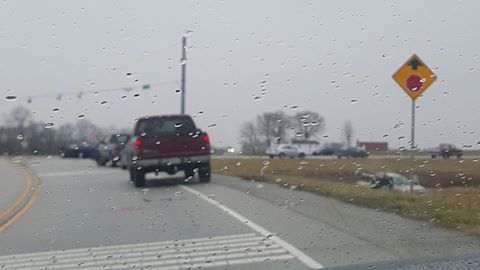 The Cass County Sheriff’s Department responded to a serious crash on US 24 at Cass County Road 600 East involving a passenger car and a sport utility vehicle around 12:26 p.m. Saturday, January 9.

According to a news release from the Cass County Sheriff’s Department, Sgt. Kevin Pruiett stated that a 2006 Chevrolet Trailblazer driven by Thomas D. Gordon, 39, of Logansport, was traveling north on County Road 600E and allegedly failed to yield at the intersection, pulling into the path of a westbound 2000 Ford Mustang driven by Athsian A. Grubbs, 20, of Rochester. The Mustang struck the passenger side of the Trailblazer, forcing the SUV off the northwest corner of the roadway. Both vehicles were a total loss and the west bound lanes of US 24 were restricted for a short time.

The accident is being investigated by Sgt. Kevin Pruiett, who was assisted at the scene by David Wells and Deputy Brian Swartzell with the Cass County Sheriff’s Department.