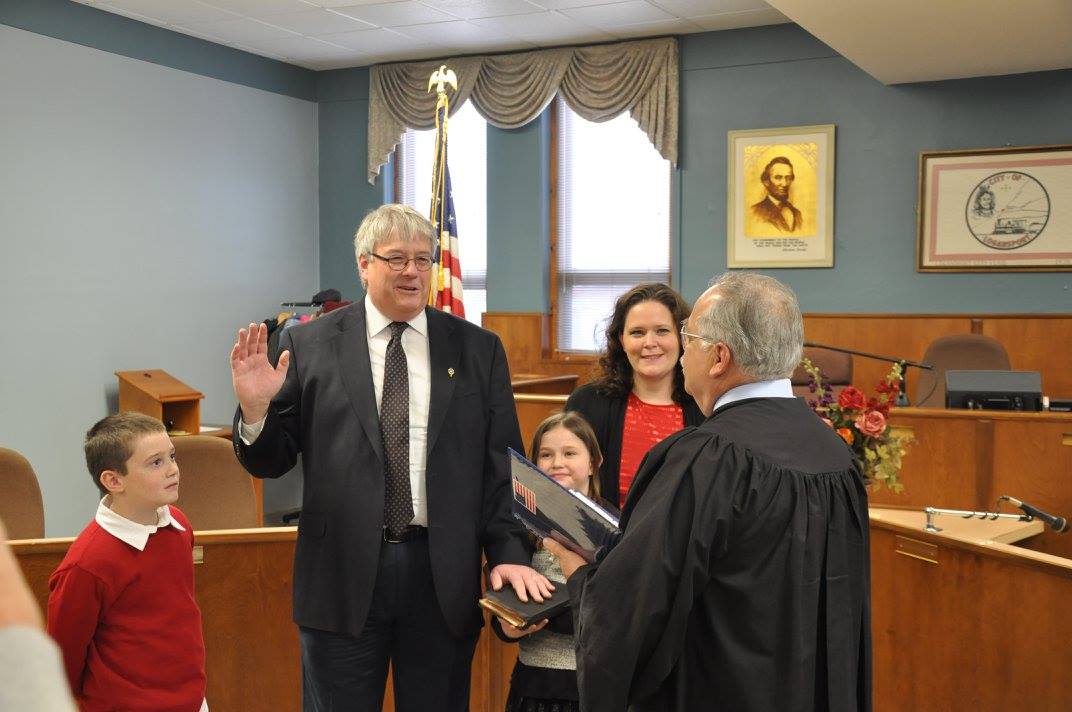 Dave Kitchell’s mayoral campaign was backed by “The Committee for a Logansport You’re Prouder to Call Home,” and at the inauguration ceremony where an entirely new slate of elected officials was sworn into office on January 1, 2016, Kitchell addressed that pride — as Americans, as Hoosiers, and as Logansport residents.

A Democrat who covered local government for years as a reporter for the Pharos-Tribune, Kitchell was the one answering the questions rather than asking them after Friday’s ceremony. He’s the city’s 51st mayor.

Democrats swept the election in November, with only one incumbent, Republican Teresa Popejoy who represents the 5th ward on the Logansport City Council, retaining her seat. Popejoy had previously announced that she would not be able to attend Friday’s ceremony due to a prior family commitment.

Some of Logansport’s youngest residents played an active role in Friday’s ceremony, with Kitchell’s son, Max, participating in the presentation of the colors with Ashton Shideler. Kitchell’s youngest daughter, Minnie, and Clerk-Treasurer Stacy Cox’s daughter, Ashlyn, led the standing-room only crowd in saying the Pledge of Allegiance. Kitchell’s daughter, Goldie, held the family Bible as both her dad and 1st ward Councilman Dave Morris were sworn into office.

Voters in the 4th ward elected Scott Peattie as their councilman, but Peattie resigned from the position due to a state law that does not allow him to serve as a city official due to his employment through LMU. Democrats appointed Joe Ness to the position, and Ness was also sworn in on Friday.

Kitchell then invited his appointed employees to the front of the council chambers and he administered the oath.

Addressing the crowd before the ceremony, Kitchell, a 1980 graduate of Purdue University, began his remarks by reciting a Purdue tradition,  “I Am An American.”

He spoke of Indiana’s bicentennial year, sharing a list of “You know you’re from Indiana”-isms.

“That’s Logansport
Where you speak to people every time you meet them on the street,
Even if it’s a half dozen times a day;
Where you feel like you know more people than you don’t know
And like almost all of them.
Where people ask: “How are you?”  and care
Where everybody is interested in what’s your own darned business
Where you know every crack in the sidewalks you’ve walked
Where Market Street in a fog reminds you of London;
Where Fourth Street has felt as good as Paris in the spring,
Where the closest you’ll probably ever get to the steppes of Holy Russia is when
Walking down East Broadway covered with soft falling snow.
Where you have played, gone to school, worked, dreamed and suffered.
Been happy, looked up to the sky and into the universe and eternity;
And where a lot of people will make a big fuss over you when you die.”

The Logansport City Council’s Utilities and Rules committees will meet on Monday January 4, 2016 at 5:00 p.m. in the City Council Chambers on the third floor of City Hall to discuss new organization and appointments to boards.

Kitchell says a public meeting about the power plant will be held at McHale Performing Arts Center on January 14.