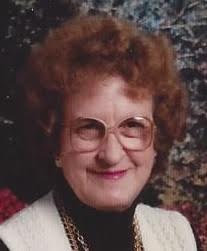 Born December 9, 1923,  in South Bend, she was the daughter of the late Chester D.  and Mary R. Dewitt Kistler.

Marr was a graduate of Onward High School.  She was retired from Tay-Mor Industries.

A member of the Lucerne Zion United Methodist Church, Marr was a loving Christian who adored her sons and cherished the title of “grandma and great-grandma.”  Her family meant the  world to her.

She was a member of the Royal Center Chapter No. 375 Order of Eastern Star and  the Red Hat Society. Her favorite pastimes were crossword puzzles and traveling.

A funeral service celebrating the life of Marr Minnick will be held at 2:00 p.m. Tuesday, March 1, 2016, in Fisher Funeral Chapel with Pastor Adam Speicher officiating.

Visitation will be from noon until the time of the service on Tuesday at the funeral home. An Eastern Star service will be conducted at 1:45 p.m. prior to the funeral.

Memorial contributions may be made to the Lucerne Zion United Methodist Church .

‘Operation Dry Water’ to target boating while under the influence July 2-4, 2022