Last Updated on February 12, 2016 by cassnetwork 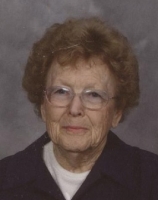 Born March 7, 1921, in Howard County, she was the daughter of the late Orville and Edith (Gushwa) Brown.

When her husband opened his optometry business on the south side, Polly worked hand-in-hand with him every day –doing whatever needed to be done in the office – be it bookkeeping, scheduling appointments or fitting glasses. They were a great team together.

Polly was a dedicated member of the East Main Street Church of God. She saw a need in the church and led the Nifty 50’s group. In earlier years, when she went to Wheatland Ave. United Methodist Church, she taught Bible School and was active in the ladies’ circle.

She was the first woman elected to the Logansport Community School Corporation school board. Polly was very involved during the construction of the new high school on Berry Lane. She also served on the Cass County Public Library Board of Directors.

Polly enjoyed fishing, mushroom hunting, planting trees in the woods, knitting and crocheting. She was a member of a Bridge club. Time spent with her children and grandchildren were the best part of her life.

The family also wishes to express their appreciation to the wonderful caregivers who made it possible for Polly to live at home.

She was preceded in death by two brothers, Lynn and Glenn Brown.

A funeral service celebrating the life of Polly Carbaugh will be held at 2 p.m. February 15 at the East Main Street Church with Rev. Dr. Gregory Elkins officiating.

Burial will follow in Maple Lawn Cemetery in Flora.

A visitation will take place from noon until 2 p.m. prior to the service in the church on Monday.

Memorial contributions may be made to the East Main Street Church of God.

You may share online condolences and view her video tribute at www.fisherfuneralchapel.com.