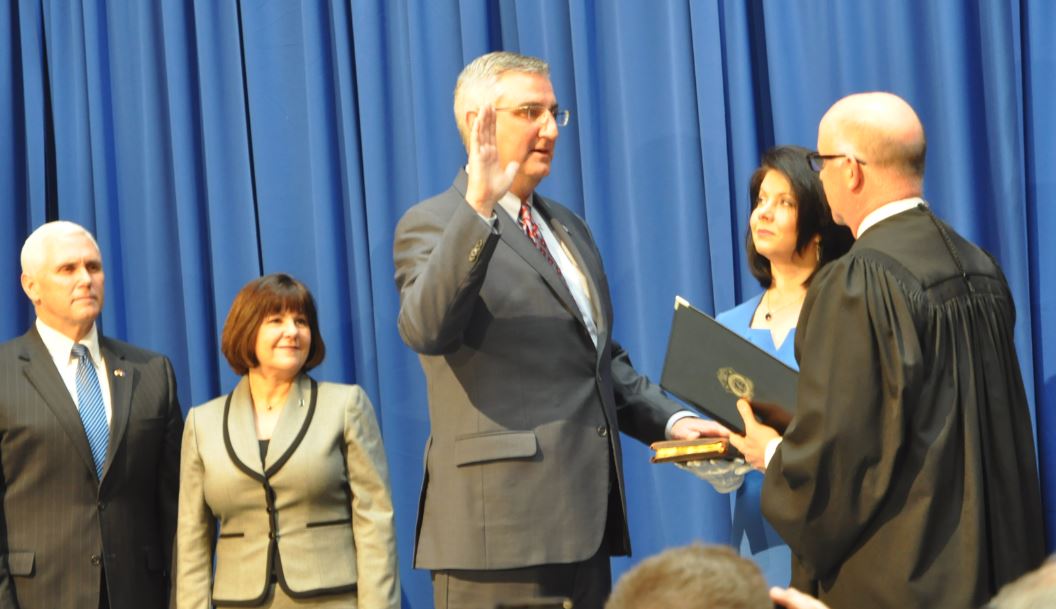 Eric Holcomb sworn in as 51st Lieutenant Governor of Indiana

Last Updated on March 6, 2016 by cassnetwork

“Eric Holcomb is a Hoosier through and through, and I’m proud that he has officially taken his oath to join the administration as Lieutenant Governor,” said Governor Pence. “Eric has a heart for public service and a love for Indiana like few people I’ve ever met, and I’m grateful for Eric and his wife Janet’s willingness to serve this state. I know that Eric’s enthusiasm, integrity, and extensive experience at both the state and federal level will serve him well as he assumes the duties of the Office of the Lieutenant Governor. I’m looking forward to working with Eric in the coming months, and I know that he’s ready to get to work for the people of Indiana.”

On February 9, Governor Pence announced his intention to nominate Holcomb as Lieutenant Governor. He formally nominated Holcomb on March 2, and on March 3, Holcomb was confirmed by majority vote in the House of Representatives and the Senate.

“I could not be more excited or more proud to serve as Lieutenant Governor of the state of Indiana,” said Lieutenant Governor Eric Holcomb. “I am grateful for the opportunity to work alongside Governor Pence to build on Indiana’s strong foundation and make tomorrow stronger. I’m eager to get started, and I look forward to hitting the ground running to serve the Hoosiers of this great state.”

Eric Holcomb has spent his career in public service.  Most recently, he has served as State Chief of Staff to U.S. Senator Dan Coats. Prior to that role from 2003 to 2011, Holcomb served as Governor Mitch Daniels’ deputy chief of staff and managed the Governor’s 2008 re-election campaign. Holcomb has also served as chairman of the Indiana Republican Party and as a member of the Republican National Committee. Holcomb got his start in politics managing successful races for U.S. Congressman John Hostettler and a mayoral race in Vincennes, where he lived at the time. Holcomb earned his undergraduate degree from Hanover College and is a veteran of the United States Navy. Eric and his wife, Janet, live in Traders Point, Indiana.