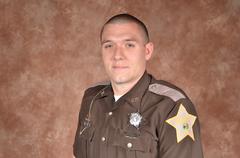 The Marion County Coroner’s Office preliminary autopsy report has determined Deputy Carl Koontz died as the result of a single gunshot wound to the pelvis.  Homicide is the manner of death.

The Howard County Coroner’s Office preliminary autopsy report has determined the cause of death of the suspect, Evan Dorsey, was a self-inflicted gunshot wound to the head.

The Howard County Sheriff’s Department and the Indiana State Police, as well as police agencies across Indiana are greatly appreciative of the outpouring of support for Deputy Koontz’s family.

No further investigative information is available until the investigation is completed.

Indianapolis – Howard County Sheriff’s Department Sergeant Jordan Buckley has been released from Methodist Hospital. Buckley will be participating in the procession to bring Deputy Carl Koontz, killed in the line of duty, home to Kokomo.

While serving an arrest warrant in the early morning hours of March 20th, Sgt. Buckley was wounded in the upper thigh during a shootout with the wanted suspect. Buckley was first transported to Howard Community Hospital, then transferred to Methodist to treat his wounds. The same incident claimed the life of 27 year old Deputy Carl Koontz.

Sgt. Buckley, who was just recently promoted to sergeant, is expected to make a full recovery. He will be riding along in the police procession this afternoon. Please keep Sgt. Buckley and his family in your prayers as they begin the road to recovery.

The following information is being provided on behalf of Sheriff Steve Rogers, Howard County Sheriff’s Department:

Sergeant Buckley is listed in good condition, it is not yet known when he will be released,  Sheriff Rogers said “we will be happy to have him home.”

At 11:10 am today a moment of silence will be observed, marking 24 hours from the time Deputy Carl Koontz succumbed to his wounds. This was requested by his wife Kassandra Koontz via social media.

During the day today members of the Howard County Sheriff’s Department, as well as officers from other agencies, will attend a critical incident stress debriefing. This is a standard procedure for line of duty deaths and will allow those affected by this tragedy to grieve, comfort one another and seek counseling if needed. Please keep all involved in your thoughts and prayers.

This afternoon at 2 p.m., a procession will begin from Indianapolis to Kokomo, carrying the body of Deputy Carl Koontz. This will be a multiple agency effort and will involve dozens of police officers from several agencies. The details of the route of travel will be released later this morning. The community is invited to line the procession route in order to show respect for Deputy Koontz,  as well as to show support for his family and colleagues.

The suspect has been identified as 25 year old Evan Dorsey.

Details about funeral arrangements and upcoming events will be released as they become available. Members from law enforcement and the community will continue to offer support to Kassandra Koontz, son Noah and the entire family of Deputy Koontz. We will provide every resource possible to comfort them during this unimaginable time.

The Indiana State Police will continue their investigation into this heinous crime. As information from the investigation becomes available it will be released.

Indianapolis – Governor Mike Pence today directed that flags at state facilities statewide be flown at half-staff following the announcement that Howard County Sheriff’s Deputy Carl Koontz was killed in the line of duty. Flags should be flown at half-staff beginning immediately until sunset on the day of Deputy Koontz’ funeral. Governor Pence asks businesses to lower their flags to half-staff to honor the service and sacrifice of Deputy Koontz. Governor Pence also issued the following statement regarding the service of Deputy Koontz and that of fellow officer Sergeant Jordan Buckley, who was injured in the line of duty.

“Karen and I were deeply saddened to learn of the passing of Howard County Sheriff’s Deputy Carl Koontz and we extend our deepest condolences and prayers to his family, friends and the law enforcement community of Howard County who grieve the passing of this courageous young officer. Indiana will always honor the memory of Deputy Koontz and will always be grateful for his courageous service. Deputy Koontz lost his life in the line of duty and his passing reminds us all of the courage and risk that every member of our law enforcement community and their families face every day in the defending our communities.

“We also offer our gratitude and prayers to Sergeant Jordan Buckley who was injured during the same incident in the line of duty. We are grateful for his courage and pray that he will make a quick recovery from his injuries and be restored soon to his family and his service to the people of Howard County.”

The Indiana State Police are leading the investigation on the scene and are providing support to the local law enforcement community in Howard County.

“My heart goes out to these officers and their families, particularly the family of Deputy Carl Koontz who was tragically lost earlier today. I am keeping them in my prayers. Every day, law enforcement officers across our state and our country get up, go to work, and put their lives on the line to keep us safe. This tragedy is a reminder of that dedication, and of our obligation to honor their service.”

Howard County Sheriff Steve Rogers announced around noon today that 27 year old Deputy Carl A. Koontz, an almost three year veteran of the Howard County Sheriff Department has died as a result of the gunshot injuries he sustained during a warrant service early this morning.

At approximately 12:30 a.m., Koontz, along with Howard County Sheriff Sergeant Jordan J. Buckley and officers from the Kokomo Police Department were attempting to serve a search warrant at 380 Chandler Street in Russiaville, southwest of Kokomo.

Koontz and 35 year old Buckley were wounded during the exchange.  A Russiaville officer and other deputies were able to extract the wounded officers from the residence and provide first aid.  Both Koontz and Buckley were transported initially to Howard Regional Hospital, stabilized and then airlifted to Methodist Hospital in Indianapolis.

Deputies had secured the area around the residence, removing residents adjacent to the scene for their safety.  Howard County SWAT, Kokomo Police SWAT and Indiana State Police SWAT responded and attempts to contact the occupant of the residence began about 2:30 a.m. with no response.  These attempts continued for about two hours.  SWAT personnel were able to confirm an individual was deceased inside of the residence.  That person’s identity has not yet been confirmed.

Indiana State Police is the lead investigative agency and while the investigation is still in its early stages, crime scene investigators and detectives are working diligently to determine the dynamics of the incident.