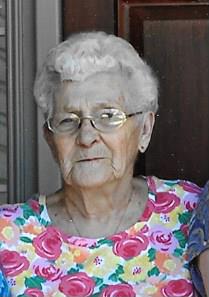 Florence J. Baldwin, 85 of Kewanna passed away peacefully at 3:05 p.m., Saturday, March 19, 2016 at her residence surrounded by her loving family.

Born on July 27, 1930 in Winamac, she was the daughter of the late Arnold and Mary (Young) Stepp.

Florence had been a waitress at the Mar-Lo Restaurant in Kewanna and she formerly owned and operated Baldwin Sundries in Kewanna for many years and then retired from Winamac Coil Spring in Kewanna.
Florence was a member of Kewanna United Methodist Church where she was active in the Food Pantry Ministry as well as the UM Women.

She was also a former member of the Kewanna Union-Township Volunteer Fire Department Women’s Auxiliary.  She enjoyed baking and playing Yahtzee with her best friend, Virginia Agnew.

Services will be at 11:00 a.m., Wednesday, March 23, 2016 at the Kewanna United Methodist Church with Pastor Todd Wilson officiating.
Visitation will be from 3:00 p.m. to 8:00 p.m., Tuesday, March 22, 2016 at the church and also one hour prior to the service on Wednesday.
Burial will follow at Citizens I.O.O.F. Cemetery in Kewanna.

In lieu of flowers, donations may be made to the Kewanna Food Pantry Ministry.

Please sign the online guestbook or leave a condolence for the Baldwin family at www.ransfuneralhomes.com.

Arrangements have been entrusted to Harrison-Metzger-Rans Funeral Homes, Kewanna Chapel.