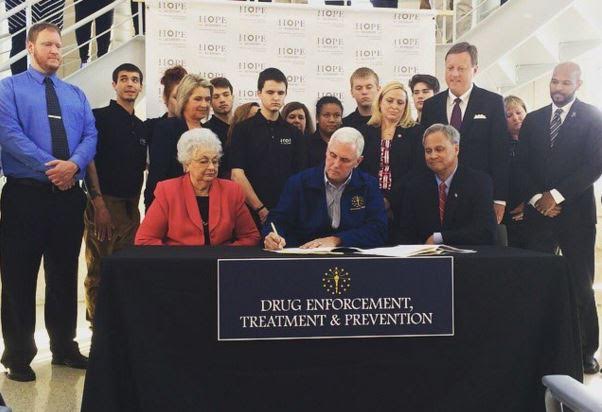 Governor Mike Pence today signed bipartisan legislation to combat drug abuse in Indiana. These bills were recommendations of the Governor’s Task Force on Drug Enforcement, Treatment and Prevention, which was created on September 1, 2015 by Governor Pence and consists of experts from a variety of specialties tasked with developing a comprehensive approach to addressing drug problems in Indiana.

“The scourge of drug abuse has brought heartbreak for far too many Hoosiers families,” said Governor Pence. “Drug abuse problems are not unique to our state, but I’m determined to meet this challenge head-on here in Indiana. To start, I believe that any strategy to address drug abuse must start with enforcement. We need to make it clear that Indiana will not tolerate the actions of criminals, and I’m pleased to sign into law HEA 1235 to increase penalties on drug dealers.

“As we seek to address the root causes of addiction and focus on treatment, I’m also pleased to sign additional legislation that provides for opioid dependence treatment, a standing order for naloxone and immunity for certain individuals who administer it, and establishes the Indiana Commission to Combat Drug Abuse. The best way to reduce, prevent and treat drug addiction is to develop a holistic and collaborative approach, and I’m confident that these bills will help save Hoosier lives.”

The Governor signed the following bills regarding drug enforcement, treatment and prevention:

The governor also signed three bills into law regarding the sale of pseudoephedrine cold medicine. The first, SEA 80, authored by Sen. Randy Head (R – Logansport) and Sen. Jim Merritt (R – Indianapolis) allows a pharmacist to deny the sale of ephedrine or pseudoephedrine on the basis of the pharmacist’s professional judgment, and provides the pharmacist with civil immunity for making such a denial.  The Governor also signed SEA 161, authored by Sen. Mike Young (R – Indianapolis) and Sen. Luke Kenley (R – Noblesville) and HEA 1157, authored by Rep. Dave Frizzell (R – Indianapolis), which require the Division of State Court Administration (DSCA) to report certain methamphetamine-related felonies to the National Precursor Log Exchange (NPLEx) so that NPLEx can generate a stop-sale alert to prevent individuals who have been convicted of meth-related felonies from purchasing ephedrine or pseudoephedrine.

“The scourge of drug addiction impacts our communities in profound ways,” said Governor Pence. “These bills, which I am pleased to sign into law, will make it more difficult for criminals to obtain the materials used in the production of meth. It also protects Hoosier consumers who use cold medicines responsibly to treat illness. Our administration will continue to prioritize the issue of drug abuse, and these bills mark a positive step in combating drugs as it relates specifically to meth.”

The governor also signed one of his agenda items to add human trafficking to the Child In Need of Services (CHINS) code to allow the Department of Child Services (DCS) to intervene and serve children who are victims of human trafficking. SEA 305 is authored by Sen. Randy Head (R – Logansport) and Sen. Patricia Miller (R – Indianapolis).

“The criminal enterprise of human trafficking takes advantage of victims who are often vulnerable kids,” said Governor Pence. “I’m pleased to sign Senate Enrolled Act 305 into law which will allow the Indiana Department of Child Services to intervene on behalf of victims and provide valuable services as we seek to protect Hoosiers from this grievous crime.”

The Governor also signed the following bills into law regarding law enforcement procedures.

“Rooted in consumerism and personal responsibility, Indiana’s HIP 2.0 program is establishing a new health care paradigm that has become a model for other states,” said Governor Pence. “Hundreds of thousands of Hoosiers have enrolled in this one-of-a-kind program and are taking ownership of their health care, which is a testament to the program’s continued success. Hoosiers may be assured that my administration will continue working to improve the health and well-being of Hoosiers through personal responsibility, self-sufficiency, and independence. Innovative state programs like HIP 2.0 are the model for health care reform going forward, and I couldn’t be more pleased to codify it into law today.”

HIP 2.0 is the nation’s first consumer-driven health care program for Medicaid-eligible or low-income individuals. The program has replaced traditional Medicaid for all non-disabled adults in the state. Unlike traditional Medicaid programs, the HIP 2.0 program’s goal is not only to provide access to health insurance, but to engage members to take ownership for their health. The program introduces private market insurance concepts to prepare individuals for self-sufficiency.

In January, Governor Pence marked the first anniversary of the landmark approval of the HIP 2.0 waiver and lauded the early successes of the program. Today, nearly 7 out of 10 HIP 2.0 enrollees are electing to make contributions to their health savings-like account, and the program has attracted more than 5,300 new health care providers to serve both Medicaid and HIP 2.0 members.

Another bill the governor signed today is the Achieving a Better Life Experience Act (Senate Enrolled Act 11), which creates a savings program for Hoosiers to better provide for their loved ones with special needs by allowing them to save money for disability-related costs without placing other benefits at risk. The bill is aimed at easing the financial strain faced by an individual with disabilities by making tax-free savings accounts available to cover qualified expenses such as education, housing, health care and transportation. The ABLE Act was included on the Governor’s 2016 legislative agenda and championed by State Treasurer Kelly Mitchell and Sen. Luke Kenley (R-Carmel).

“Hoosiers with disabilities face enormous financial hurdles and planning for the future becomes a daunting task,” said Governor Pence. “Today as we sign the ABLE Act into law, we open a financial door for individuals with disabilities and empower them to save in a way that enables them to experience life to its fullest.”

“I’m grateful today for the partnership of Governor Pence, lawmakers, stakeholders, and advocacy organizations who helped bring this important bill to fruition,” said Treasurer Mitchell. “The ABLE Act will give Hoosiers with disabilities the tools to invest in a brighter future. I was honored to spearhead this legislation and am especially proud today as the Governor signs this bill into law.”

The bill creates ABLE accounts that will allow individuals and their families to create a tax advantaged savings account that can be used for certain disability related expenses, such as education, housing, health care, and employment training. These accounts are structured similar to a College Choice 529 Direct Savings Plan and will enable families and individuals to save for qualified expenses without risking their eligibility for other relied upon benefit programs, such as Social Security and Medicaid.

The ABLE Act passed the Indiana General Assembly this legislative session with unanimous, bipartisan support. The bill was signed into law in a public ceremony held in the rotunda of the Indiana Statehouse. A photo of the ceremony can be found attached.