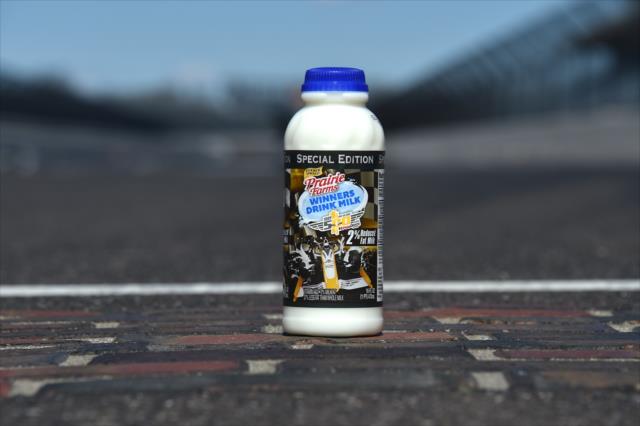 INDIANAPOLIS – The most iconic celebration in sports will add a new chapter to its legacy this year, as 100,000 fans will have the chance to share the world’s largest milk toast with the winner of the 100th Running of the Indianapolis 500 presented by PennGrade Motor Oil. The Indianapolis Motor Speedway is teaming up with the American Dairy Association (ADA) and Prairie Farms to add this spectacular moment to Race Day.

“Drinking the milk in Victory Circle is one of those special traditions that sets us apart from other events,” Indianapolis Motor Speedway President J. Douglas Boles said. “This year, as we mark the 100th Running of ‘The Greatest Spectacle in Racing,’ we felt it was important to bring as many fans as possible into the mix. This 100,000-strong milk toast will be an epic part of an unforgettable Race Day.”

On Race Day, 100,000 16 oz. pints of Prairie Farms milk will be distributed by ADA volunteers to spectators sitting in the grandstand sections along the front stretch. The milk bottles will be available throughout the race at several strategic locations which will be announced before the event.

“Being a part of the victory celebration and that famous drink of milk, representing Indiana dairy farmers who produce the milk is a special thrill, honor and tradition of American Dairy Association Indiana,” said Deb Osza, American Dairy Association Indiana. “We are excited to continue our partnership with the Indianapolis Motor Speedway and the Indianapolis 500 Mile race in 2016 at the 100th Running of the Indy 500. We’ll be there helping distribute 100,000 milks. We hope to see you on Race Day!”

“Prairie Farms is looking forward to providing milk for the World’s Largest Milk Toast and we’re proud to be part of the most iconic celebration in sports,” Prairie Farms CEO Ed Mullins said. “We strongly believe in giving back to the communities we serve. Not only is Prairie Farms providing 100,000 commemorative bottles of milk for the celebration, our farm families and employees will be there to engage with race fans throughout the day.”

The pints of milk will be specially branded for the 100th Running and will be available at retailers leading up to the race. Fans are encouraged to buy ahead of time to ensure they can celebrate with the winner. A 50-cents-off coupon is included in the Indy 500 ticket mailing. Fans watching from home are encouraged to purchase and participate as well.

IMS video boards and PA equipment will be used to help notify attendees of the time to raise their bottle of milk alongside the 100th Running champion. Get ready for a photo moment not to be missed!

The tradition of drinking milk following an Indy 500 victory began in 1936 with three-time champion Louis Meyer. Meyer regularly drank buttermilk to refresh himself on a hot day and happened to drink some in Victory Lane as a matter of habit after winning the 1936 race. An executive with what was then the Milk Foundation was so elated when he saw the moment captured in a photograph in the sports section of his newspaper the following morning that he vowed to make sure it would be repeated in coming years.