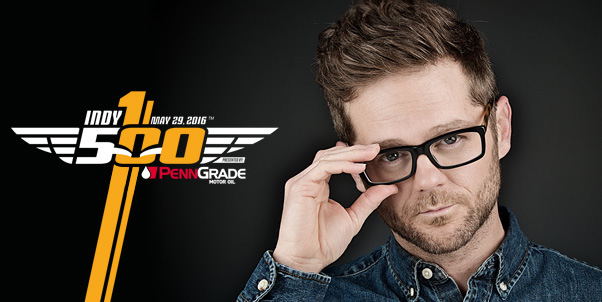 NDIANAPOLIS – When the 100th Running of the Indianapolis 500 presented by PennGrade Motor Oil welcomes race fans with the traditional singing of “Back Home Again in Indiana,” a distinct Indianapolis flavor will mark the occasion.

Indianapolis’ own Josh Kaufman, winner of the sixth season of television’s “The Voice,” will perform the beloved song at the Indianapolis Motor Speedway with accompaniment by the Indianapolis Children’s Choir, a fixture of the Central Indiana community for 30 years.

“The singing of ‘Back Home Again in Indiana’ is a signature of the Indianapolis 500 and one that our fans cherish as a distinctly ‘Hoosier’ moment,” said J. Douglas Boles, Indianapolis Motor Speedway president. “Since Jim Nabors’ final performance in 2014, our goal is to select performers who have an understanding of the song’s meaning and significant importance to the Indianapolis 500 experience and the race’s fans. Josh Kaufman’s impressive voice and local ties, along with support from the Indianapolis Children’s Choir, will deliver just that.”

For most of his life, Kaufman has used his smooth, masterful vocals to uplift and inspire. As winner of the sixth season of “The Voice,” the Indianapolis-based singer/songwriter displayed stunning range and singular power to capture pure emotion. Also a longtime guitarist and piano player, Kaufman is now gearing up to release his new album this spring, channeling his rich vocal work into a gracefully catchy blend of soul, funk, R&B, rock, and classic pop.

Growing up in a musical family, the Florida-born Kaufman got his start singing in church when he was just 4 years old. In addition to performing in choirs throughout his childhood, he further honed his vocal skills in part by closely studying the layered harmonies of gospel music.

Along with setting to work on his debut album, Kaufman has kept busy over the past year by sitting in with The Roots on “The Tonight Show Starring Jimmy Fallon,” headlining the Indy Jazz Fest, and making his Broadway debut in the Tony Award-winning “Pippin,” in which he played the lead and title role.

“I strive to make deep emotional connections with my music and on Memorial Day Weekend at the Indy 500, nothing goes deeper with fans than ‘Back Home Again in Indiana,'” said Kaufman, who also served as grand marshal of the 2014 IPL 500 Festival Parade. “I can’t wait to be a part of history on such a special day.”

Joining Kaufman will be the Indianapolis Children’s Choir (ICC), which celebrates its 30th anniversary this year. Founded in 1986 by artistic director Henry Leck, the ICC nurtures and inspires student achievement through quality music education and the pursuit of artistic excellence in choral music performance. The 2015-16 season marks the ICC’s 30th anniversary and a major transition in artistic leadership, as Henry Leck retires and passes the baton to Assistant Artistic Director Joshua Pedde. This season also celebrates the organization’s impact on Indiana for more than a generation and its legacy in youth development and children’s choral music.

Housed on the campus of Butler University in Indianapolis, participants in the program represent the diversity of central Indiana with children from nearly 20 counties, including all of the Indianapolis area suburbs and nearby rural communities. These children come from over 359 schools and 56 school districts. Each week, the ICC holds 110 rehearsals and music classes.

The ICC regularly appears with orchestras, professional artists, and ensembles of the highest caliber each year. The choir performed the national anthem with Grammy-winner Kelly Clarkson at Super Bowl XLVI in Indianapolis for the largest US television audience in history. Recording extensively, the ICC has produced 15 CDs including those with the Canadian Brass and the Moscow Chamber Orchestra.

“(Back Home Again in) Indiana” – the song originally was just called “Indiana” – was written in 1917 by lyricist Ballard MacDonald and composer James Hanley, incorporating many lyrics and musical themes from the 1897-written “On the Banks of the Wabash,” the state’s official song.

According to IMS historian Donald Davidson, the song may have been heard at the race as early as 1919 (played by a trackside brass band) and was first sung in 1946, about an hour before the green flag by New York Metropolitan Opera performer James Melton. Around 1949 it was moved to closer to the start of the race, where it remains today.

Fan favorite Jim Nabors retired after the 2014 race, having performed the song live 35 times starting in 1972.

Tickets are now on sale for the Angie’s List Grand Prix of Indianapolis, 100th Running of the Indianapolis 500 presented by PennGrade Motor Oil, Brickyard Vintage Racing Invitational, Lilly Diabetes 250, the Crown Royal Presents the “Your Hero’s Name Here” 400 at the Brickyard and the Red Bull Air Race. Fans have three quick, convenient methods to buy tickets:

Tickets for groups of 20 or more also are available. Contact the IMS Group Sales Department at866-221-8775 for more information.

Information on parking and camping at IMS events is available at www.ims.com/tickets.