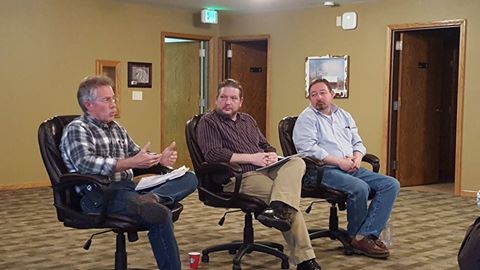 Last Updated on April 3, 2016 by cassnetwork

Ward 1 councilman Dave Morris and at-large representatives Kevin Burkett and Terry Doran offered updates on what’s happened during the new administration’s first three months in office, and answered questions from those in attendance.

“One of the things people said was that they felt disconnected,” Morris said. “We want to try to do this every quarter.”

The meeting, held in the Penman Building across from Huston Park, was targeted toward residents who live in Ward 1 (the city’s north side). Councilman Larry Hood, who represents Ward 2 (the south and west sides of the city), also attended.

Topics of discussion included the following:

Council has changed its meeting time to 6:30 p.m. to allow more people to attend.

The police department is working overtime with county and state. Morris says meth “is probably the biggest problem in Logansport and probably one of the biggest in Indiana.”

Testing is currently underway at the former Trelleborg site to determine contaminants.

The city’s blight elimination board is working to demolish six properties – two on Michigan Avenue, one on Chicago Street and three on West Linden. These projects require extensive paperwork. Eventual goal is that the properties will be put up for sale after demolition. The city received grant funding from the state for this project, and the work must be done by August.

Morris and Doran toured the city pool and say that a lot of work still needs to be done on the building, specifically related to ventilation.

City and county are cooperating on some projects, including the Memorial Home. Water, heat and air were turned off for about a year and a half and there are issues with the roof. Burkett said there was some vandalism and graffiti. The Cass County Arts Alliance plans to hold ArtRageous there on April 15. The city is in the process of looking at grants to renovate the facility. Because it is designated as a war memorial, the county could not just give it to the city.

The council appropriated $20,000 to help local businesses hire college students for internships, at up to $1,000 per person.

The main questions those attending had related to city sidewalks and the condition of West Market Street. The council has allocated money for the return of the match program that allows residents to receive matching funds to replace sidewalks at their properties.

The council members said there are many projects slowly taking shape, and said one of the challenges is “getting the community to buy in to where they live.”

“This town has been through a lot,” Burkett said.

Morris said he hopes to schedule Ward 1 Community Meetings quarterly and to see attendance at the meetings grow.
“If you care about Logansport, we can all find a place,” Morris said.