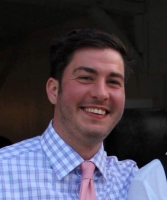 A 2006 graduate of Logansport High School, Daniel was active in football and track. He went on to attend Indiana University in Bloomington where he was a member of the Delta Upsilon fraternity. He graduated from the Arts Institute of Indianapolis with a degree in Culinary Arts.

Daniel had recently been promoted to the position of sous chef at The Table by Market District in Carmel. He loved to cook and found the fast pace of his job exhilarating.

Daniel was a lifelong member of the First United Methodist Church in Logansport.

A true sports enthusiast, Daniel loved fishing, watching sports, especially Notre Dame football, anything with IU involved and the Colts. “Once a Berry, Always a Berry,” he was devoted to his alma mater and enjoyed listening to Berries games. He enjoyed a good game of cards and good music – Daniel had the ultimate play list. He enjoyed being with family and friends and loved being “Uncle Daniel.”

Surviving are his mother, Terri Taylor Tribbett, of Noblesville; his father Donald and wife Connie Tribbett, of Logansport; his sister and brother-in-law, Kristen and Joe Alkire, of Greensboro, North Carolina; his brother and sister-in-law, Matthew and Jessica Tribbett, of Greensboro, North Carolina; and his twin brother and sister-in-law, David and Kristin Tribbett, of Denver, Colorado; his nieces and nephew, Ava and Logan Alkire, Ruby Tribbett, with two more on the way; his maternal grandmother, Ruby Taylor, of Noblesville; his paternal grandfather, Robert “Bob” Tribbett, of Logansport; aunts and uncles: Linda and Rand Wilburn, Lisa and Kevin Smith, all of Noblesville, and Robert D. Tribbett, of Switzerland; and cousins: Andrea Dickover, Taylor and David Lintelman, Alisse Wilburn, Konner Smith, Jessica Tribbett and Griffin Smith.

He was preceded in death by his paternal grandmother, Nellie Tribbett; his maternal grandfather, Thomas Taylor, and his aunt Cathy Taylor Hodson.

We will miss your sparkling eyes and sweet smile. If only you knew how much joy you brought us. You have left a void that can’t be filled. Our family will never be the same.

A funeral service celebrating the life of Daniel Tribbett will be held at 11 a.m. Saturday, April 30, 2016, in Fisher Funeral Chapel

Memorial contributions may be made to the Logansport High School Football program through the LHS Athletic Department.