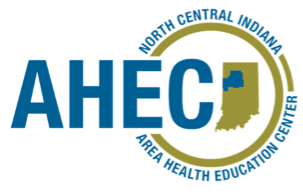 A partnership between the IU School of Medicine, the North Central Indiana Area Health Education Center (AHEC) and Pulaski Memorial Hospital is bringing third year medical students to Winamac for family practice rotations. The four week clinical rotations are supervised in Winamac by Dr. Rex Allman, “It takes a little bit of adjustment to make room in my schedule for interaction with the students but is well worth it. I feel energized and find myself re-examining the way I practice in an effort to stay up-to-date with medicine for both the hospital and office practices.”

AHEC is a national program funded largely in Indiana by the State Department of Health. There are eight Indiana AHEC districts. The North Central Indiana AHEC is housed by the Fulton Economic Development Corporation from where it oversees healthcare education programs in eleven counties. AHEC works to increase awareness of potential healthcare careers among students from disadvantaged backgrounds. Additionally, AHEC provides continuing education programs for healthcare professionals and facilitates clinical rotations of healthcare students into rural and medically underserved communities.

North Central Indiana AHEC Executive Director, Jeremy Ashcraft, says Winamac is one of many small communities that has welcomed AHEC. Several medical students have been housed by community members such as Pat Larkin and Pulaski County is represented on the AHEC Advisory Board by Star City resident Kathi Thompson. “AHEC has great partners and champions in Pulaski County which makes our mission much easier to fulfill,” says Ashcraft.

Allman believes the experiences student receive while in Winamac are very valuable, “A small-town medical practice is different in many ways from the bigger city experience students get. This may be a student’s only exposure to these differences. Here, the usual doctor-patient relationship is long term, many times multigenerational. It’s not unusual to know and provide medical care for three generations of the same family.” It’s an experience students seem to value as well. IU Medical Student Nathan Kim says, “I was very happy with the opportunity AHEC and Dr. Allman’s office provided. Winamac is a great rural community and a great representation of medicine in a small town.” Nathan says he took so much away from the experience, “Being able to get back to my Hoosier roots there reaffirmed for me what makes Indiana special.”

Allman says it has been a pleasure working with third year medical students and says his patients have been very welcoming to the students. He will continue to take students during the next eighteen months. AHEC will place 22 students in North Central Indiana over the next eighteen months in Cass, Clinton, Howard, Pulaski, and Tippecanoe Counties. Like Allman, many of the participating physicians in those counties will teach multiple students, “I appreciate the many doctors and other health professionals who gave of themselves to teach me the “art of medicine”, perhaps known nowadays as “soft skills”.  It’s fun to pass these on to the next generation of doctors, especially knowing how rapidly the medical environment is changing.”