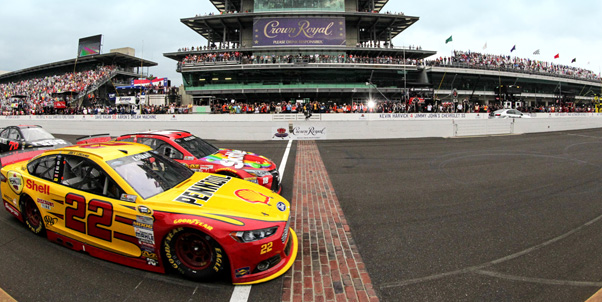 INDIANAPOLIS –  The 2017 Crown Royal Presents the “Your Hero’s Name Here” 400 at the Brickyard, one of the marquee events in the NASCAR Sprint Cup Series, will take place on Sunday, July 23, at the Indianapolis Motor Speedway.

The Crown Royal Presents the “Your Hero’s Name Here” 400 at the Brickyard is the 20th of 36 points races on the 2017 Sprint Cup Series schedule, released Thursday by NASCAR.

“NASCAR drivers always tell us this is a special race on the calendar and one they dearly want to win,” Indianapolis Motor Speedway President J. Douglas Boles said. “We’re already preparing for their visit this July and we’re excited to be in our usual spot on the calendar for 2017.”

Kyle Busch made history last year at IMS by “doubling up” in winning the Sprint Cup race plus Saturday’s XFINITY Series Lilly Diabetes 250. The XFINITY race will be held on Saturday, July 22.

Busch will defend his title this year on July 24 against competition expected to include four-time Brickyard 400 winner Jimmie Johnson and fan favorites Dale Earnhardt Jr. and Danica Patrick.