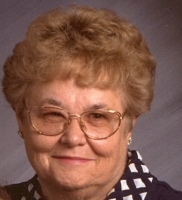 Born June 20, 1931, in Logansport, she was the daughter of the late Ernest and Ethel Grether Love.

Edna Mae was a graduate of Royal Center High School. A homemaker and farm wife, Edna Mae and Rodney were dairy and grain farmers who raised Holsteins. Their family was a tight-knit group who enjoyed not only working together, but being together to create many happy memories.

A member of the Pisgah Church, Edna Mae was a faithful believer in the power of prayer and participated in the prayer group. She also attended Shiloh Christian Church and both congregations were extensions of her family. She was a member of the Cass County Extension Homemakers.

She was preceded in death by one sister, Jane Nice and two sisters-in-law Opal Jackson and Florence Myers.

The family would like to give special thanks to Edna Mae’s close friends who helped care for her.

A funeral service celebrating the life of Edna Mae Busard will be held at 11 a.m. Tuesday, June 7 in Fisher Funeral Chapel. Pastors Ryan Lewellen and Dirk Raderstorf will officiate.

Burial will follow in the Shiloh Christian Cemetery. The funeral procession will drive past her beloved homestead.

Visitation hours will be held from 3-8 p.m. Monday, June 6, in Fisher Funeral Chapel.

In lieu of flowers, memorial contributions may be made to the Busard Family Memorial Fund in care of Cass County Community Foundation.