Last Updated on December 26, 2016 by cassnetwork 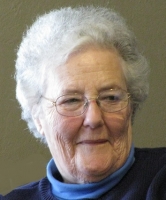 Born October 25, 1922, in Logansport, she was the daughter of the late Don and Jennie (Murden) Callender.

Juanita was a graduate of Logansport High School. She relished her role as a mother, grandmother and great-grandmother. She volunteered many years with the Tipton Elementary School PTA and as a den mother with scouting when her children were young.

A lifelong member of the Ninth Street/River of Life Christian Church, Juanita had been a deaconess, was active in the Christian Women’s Fellowship and helped with Vacation Bible School. Juanita was also a member of the Cass County Extension Homemakers and the Elkettes. She enjoyed reading, crossword puzzles and was a loyal Cubs fan.

She was preceded in death by two brothers, Bud (Martha) Callender and Jim Callender; and one daughter-in-law, Shirley Jackson.

A funeral service celebrating the life of Juanita Jackson will be held at 2 p.m. Saturday, Dec. 31, in Fisher Funeral Chapel.

Friends will be received from noon to 2 p.m. Saturday prior to the service..

You may share condolences and view Juanita’s video tribute at www.fisherfuneralchapel.com

👀Tonight, low temperatures will drop into the lower teens to around 10 degrees under mostly clear skies. Saturday will remain mostly dry before snow chances return late Saturday night into Sunday with light snow accumulations likely. Another system will move into the area Sunday night into Monday, but snow may remain just north of our area. See your full forecast at weather.gov/iwx ... See MoreSee Less

Welcome! 🎉Logan's Landing welcomes another new business to the downtown district: Logansport Nutrition! Stop and see them at 528 E. Broadway, right across the street from the Pharos-Tribune, for a large selection of shakes and tea drinks. They are open Monday - Friday 6-4 and 7-3 on Saturday. Check out their facebook page for all the latest at www.facebook.com/logansportnutrition22 ... See MoreSee Less

Friday, January 21 2:30 PM Start Time* *This will be a drive-through distribution, we ask that all clients remain in their vehicles and no one arrives prior to 2:00 PM...
View on Facebook
· Share