Last Updated on February 1, 2017 by cassnetwork 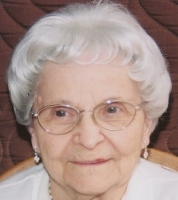 Born February 18, 1919, in Lake Cicott, Jenny was the daughter of the late John Walter Spencer  and Myrtle Emma Musall Spencer

She was a 1938 graduate of Burnettsville High School.

In 2000, Jenny retired after 25 years as the manager of the Hamilton House.

Jenny was a member of the Lake Cicott United Methodist Church.  She enjoyed crocheting and playing Bingo. In earlier years, while living in California, she enjoyed bowling.  She liked to watch Ninja Warriors, Monster Truck and NASCAR.

Her family includes daughter, Eloise Caudle and her husband Bobby of Logansport; son, Ronald Rice, Florida; three grandchildren, Penny Caudle of Indianapolis, Richard Caudle and Randy  Caudle and his wife Michelle, all of Logansport; and great-grandchildren: Michael Bushaw of Indianapolis, Bailey Kistler and her husband Nathan of Greenwood, Faryne Lawson of Kokomo, Jordan Caudle of Minneapolis, MN, Cori Caudle of Logansport, Bryce Caudle and his wife Karen of Westfield, Cady Moss and her husband Matt of Monticello; two great-great-grandchildren, Brylie and Caden Caudle, both of Westfield and one on the way; and many caregivers and neighbors at Miller’s Merry Manor and Guardian Angel Hospice, “Angles” who her family would like to thank for the loving care and companionship they gave during her time with them.

She was preceded in death by two grandsons, Robert and Jeffrey Caudle; four brothers and five sisters.

Friends will be received from 11 a.m. to 1 p.m. Saturday, Feb. 4 in Fisher Funeral Chapel.

A funeral service celebrating the life of Mildred Bloyer will follow at 1 p.m. with Chaplain Larry Phillips officiating.

Interment, at a later date, will in the Davis Cemetery, Logansport.

Memorial contributions may be made to Guardian Angel Hospice.

You may share memories in her guestbook and view her video tribute at www.fisherfuneralchapel.com