Last Updated on February 20, 2017 by cassnetwork 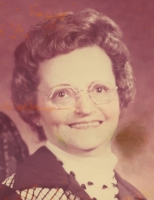 Born March 2, 1920, in Carroll County, she was the daughter of the late Floyd O. and Josephine (Shaffer) Coble.

On October 24, 1936, in the Burnettsville Christian Church, she was married to Leon E. Sands who preceded her in death February 2, 1999.

Veva began her career in radiology in 1953 at St. Joesph Hospital where she received her training from Dr. E. Jewell and Sister Chrysanthemum. For 32 years, she worked at the State Hospital serving as supervisor of the x-ray department for 27 years.

She was a member of the American Legion Post 60 Auxiliary. Veva enjoyed gardening and working in her yard.

She was preceded in death one son-in-law, Clair Unger; one brother, William Coble; and two sisters, Pauline Hook and Zona Wilburn.

Friends will be received from 4 to 7 p.m. Monday, Feb. 20 and one hour prior to the service on Tuesday in the funeral chapel.

Memorial contributions may be made to the Aux American Legion Post #60 Auxiliary, the Guardian Angel Hospice or the American Cancer Society.

You may share condolences in her guestbook at www.fisherfuneralchapel.com