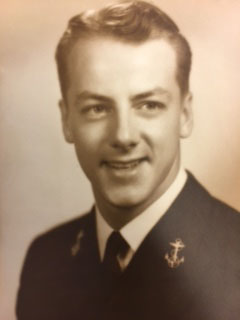 A memorial service for William “Bill” Moore, 92, will be held Tuesday, May 30th, at 4:00 pm at St. James Lutheran Church. He passed away Friday, April 21, at Miller’s Merry Manor in Logansport.

The Moore family will be receiving guests from 2:00 to 4:00 p.m. on Tuesday in the Parish Hall at St. James Lutheran Church. The Parish Hall is accessible from Spear Street, behind the church.

Bill was born August 13, 1924, in Logansport to Kermit and May White Moore.  From the age of six when his mother died, he was raised by his grandparents, Zoe and Otto Vogt.  On September 4, 1948, he married his high school sweetheart Carolyn “Crick” Drompp, who passed away on February 1, 2006.

Bill graduated from Logansport High School in 1942. That year he set an Indiana State High School pole vault record that stood for 21 years.  After graduation he spent a year at Drake University, where he continued his pole vaulting career until enlisting in the U. S. Navy during World War II.  He served on a destroyer-minesweeper in the Pacific Theater before being transferred to an officer’s training unit at Western Michigan University.  After one year he was transferred to the officer’s training unit at Northwestern University.  At both schools he was able to resume his pole vaulting career, and achieved national recognition by being named a two-time All American in track and field.  While at Northwestern he won the Big Ten pole vault title in both 1946 and 1947, as well as many other national meets.  In 1975 he was named to the Indiana High School Track and Field Hall of Fame, and in 2002 he was inducted into the Northwestern University Athletic Hall of Fame.

Bill especially enjoyed travel, nature, and the outdoors.  He was an avid student of the American Civil War.  Carolyn, his youngest who was the only child living at home for several years, made the statement, “I made more visits to Civil War battlefields and cemeteries than I care to remember!”  A lifelong resident of Logansport, Bill touched the lives of many individuals throughout the community.  In November of 2016 he was awarded the Logansport Bicentennial Citizen of the Week honor.

Bill always felt his greatest enjoyment in life was his family.  They were his pride and joy.  His children include Bruce Moore and his wife, Theresa, of Sherrodsville, Ohio; David Moore and his wife, Ruth, of Whidbey Island, WA; Susan VanDeman and her husband, Mark, of Whiteland; Janie Sampson McCord and her husband, Mike, of Sisters, OR; Alan Moore and his wife, Tracy, of Indianapolis; and Carolyn Burdsall and her husband, Mike, of Danville.  There are eighteen surviving grandchildren and 14 great-grandchildren, with one more on the way.  Also surviving is one sister, Marilyn Nolen, of Mishawaka.  Grandson Todd Sampson, and son-in-law Keith Sampson preceded him in death, as did sisters Jeanne Gruse and Virginia Foust.

Pastor K.C. Dehning will officiate at the Memorial Service. Military honors will be provided by uniformed members of the United States Navy.

A private burial will take place at Mt. Hope Cemetery preceding the service.

In lieu of flowers, memorials may be made to St. James Lutheran Church, the Alzheimer’s Association, or the donor’s choice.

Kroeger Funeral Home is in charge of arrangements.