Last Updated on December 21, 2016 by cassnetwork 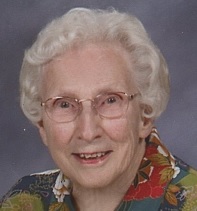 Born March 12,1922, in Miami County, she was the daughter of the late Alfred and Phebe (Butt) Raymer.

Cleora was an excellent seamstress, making clothes for people and doing repairs and alterations.  She enjoyed gardening. Cleora had a standing lunch date every Thursday with several dear friends.

Visitation hours will be from noon until the time of the service Friday in the chapel.

Condolences may be shared at www.fisherfuneralchapel.com