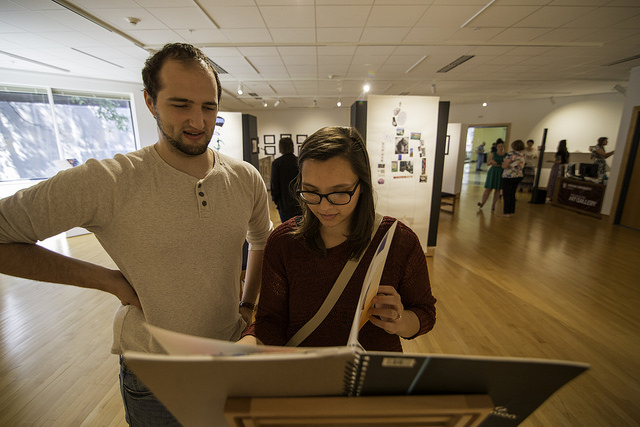 KOKOMO, Ind. — An elective taken in her final semester at Indiana University Kokomo may have led Jen Troxell to a new career path.

Troxell, who graduated in May with a degree in psychology, always planned to be an occupational therapist. After a 12-week art therapy internship class, she’s now considering a master’s degree program in art therapy.

She was one of eight students who worked with 15 young men incarcerated at the Logansport Juvenile Correctional Facility (LJCF), facilitating a program led by Brooke Komar, visiting lecturer of psychology.

“This was really a rewarding experience,” said Jennifer, from New Waverly. “Those boys all knew why they were in the facility, but when you would talk about it, you could tell it was a touchy subject. Being able to express themselves through art, without actually talking directly about their feelings, was a great outlet they might not have had otherwise.”

Work created by the youth and interns is now featured in Rise Above: Art Therapy Gives Voice to Addiction Recovery, an exhibition that runs through Saturday, July 15, in the IU Kokomo Art Gallery, in Upper Alumni Hall.

It progresses from simple line drawings to collages within life-sized body shapes, and ends with a group final project of spray painted graffiti, featuring the word “freedom.”

Komar said the program helps the boys work through psychological issues, while also giving them an outlet to express themselves.

“Essentially, they start the experience mostly having negative self-concepts of themselves, that they were criminals, and identified themselves in a negative way,” she said.  “This experience transformed those self-images, and allowed them to see positive traits in themselves.

It turned them into self-confident young men, and allows them to be vulnerable in a place where vulnerability may be seen as weakness.”

The IU Kokomo students also provide a positive model, she said, adding that one of the young men told her nobody in his family has gone to college, but meeting the interns showed him college is possible for him.

“As my students met their educational objectives, and as the boys met clinical objectives, they were growing together,” she said. “As we moved though the experience, they all gained confidence in their abilities, I saw a lot of growth, in tandem.”

This is the second year for a collaboration between IU Kokomo and the LJCF. In 2016, faculty members Jeffery Batis, Erik Deerly, and Wayne Madsen received an IU New Frontiers grant to fund an art education program at the facility, which focused on teaching artistic techniques.

With the addition of Komar, who earned a master’s degree in art therapy, the focus shifted towards art therapy.

Troxell and Libby Kimbrough, who recently completed a degree in fine arts, both participated last year as well. Libby found it interesting to witness the differences between the two programs.

“This was more using art as a tool, like a conduit for therapy,” she said. “As an artist, the work is therapeutic for me, too. For the guys, who aren’t artistically trained, it’s a healing tool. A pretty object at the end isn’t necessarily the goal. It’s the expression and the healing process.”

Creating art together is a way to explore feelings without having to actually talk about them, intern Stefanie Fuller said.

“Instead of asking ‘How are you feeling today?’ which may seem intrusive, you just let them create the art, and they’ll tell you in that way,” she said.

She was nervous about entering a male correctional facility at first, but said it was an eye-opening experience.

“It changed my mind about them, and showed me they are just people,” Fuller said. “They’re just kids who are trying to survive the best way they can.”

For more information, go to iuk.edu/gallery.

View more photos from the exhibition.