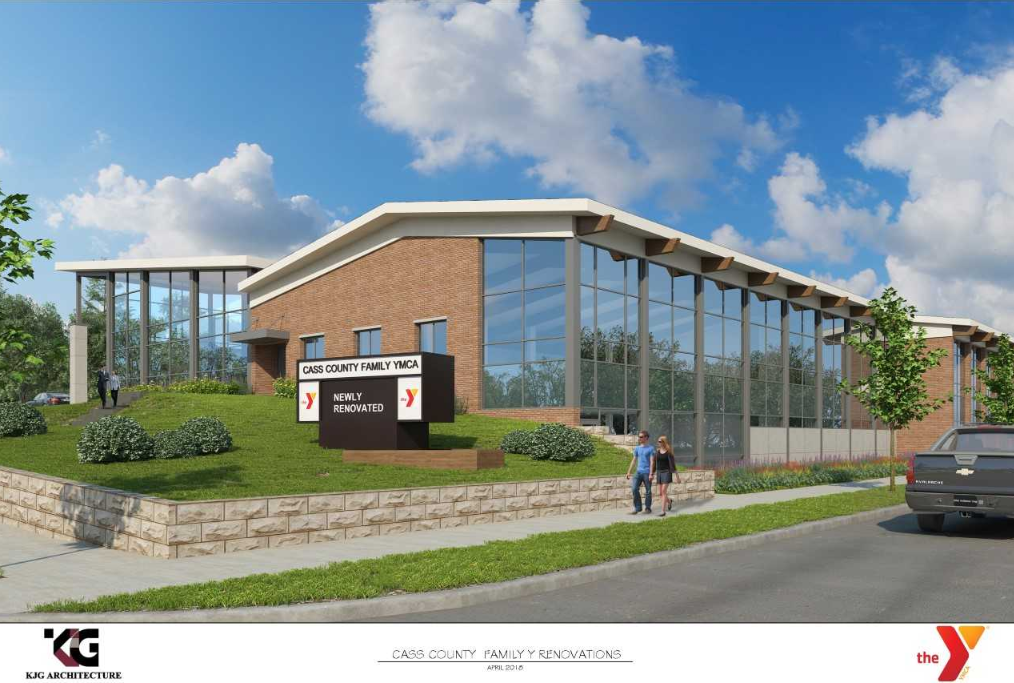 YMCA Campaign to address “The Next 50 Years”; Cole Family contributes $1 million toward project

The Cass County Family YMCA held a news conference Monday morning at the Chamber of Commerce to announce a capital campaign effort intended to raise funds for an estimated 3.5 million renovation project to the current YMCA facility and recognize the Milt and Jean Cole family who have pledged $1 million dollars toward the project. More than 60 YMCA volunteers, donors, staff members, and elected officials attended the event to learn about the project that has been labeled “THE NEXT 50 YEARS” which is a reference to the YMCA’s current facility being first opened fifty-one years ago in 1967. Local YMCA leaders have been planning and working with an architect on remodeling plans for the past 18 to 24 months in anticipation of today’s campaign announcement and construction work getting underway in 2019.

Current YMCA Board Chair, Terri Riley, spoke about the important role that the YMCA plays in the community’s quality of life with more than 10% of the county participating as active members of the local Y and another 5% participating in YMCA programs.

“The Y is an important centerpiece of our community. It serves our youth, our families, adults, and our seniors. It promotes a sense of community and helps make Logansport and Cass County a better place to live based on the values it represents. No one is turned away from the Y based on their ability to pay due to the YMCA’s financial assistance program,” Riley said.

Milt and Jean Cole were recognized for their pledge of $1 million dollars to kick off the 3.5 million dollar campaign by capital campaign chair, Brian Morrill.

“Milt and Jean have once again shown their passion and love for this community with yet another act of kindness and generosity with this million dollar gift to our community. Without them joining in this important effort early on I’m not sure any of us would be here today. Milt was our first visit about two years ago. Bob Kirkwood and I met with him to discuss his potential involvement in getting this effort underway. We went in just hoping to spark an interest and Milt gave us his full fledged support in the span of about 15 minutes. I can’t say enough about the impact the Cole family has had on our community since Milt made that train trip from Tennessee to Cass County back in the late 1950’s. Their positive attitudes and their generosity are an inspiration and an example that all of us should be thankful for and strive to model,” said Morrill. The planned renovations to the YMCA will involve improvements both inside and outside the facility. Exterior improvements will include resurfacing the parking lots, creating an identifiable and impressive glass entrance lobby to the Y, and the addition of windows from the ground floor up to the roof line along much of the building’s exterior fronting Broadway which will create a much more modern look to the facility. The new glass front along Broadway will create an inviting look from the exterior of the facility with Y programs on display to those who travel on Broadway, as well as, bringing natural light into the interior of the Y that will improve the member experience.

YMCA Executive Director, Derreck Parkevich, explained some of the interior improvements that are planned which are designed to make better use of the available space inside the current facility. “One of the areas we are most excited about is the addition of 8 private family and/or individual dressing areas that will be constructed where the boys and girls locker rooms are now. This will better serve families with young children and their parents by providing private dressing and showering space, along with serving adults and seniors who may not be able to travel up and down the steps to the adult locker rooms on the lower level. It will make our dressing and locker space much more user friendly,” said Parkevich. “We will also be turning some areas of the Y that currently don’t get a lot use during a typical day into spaces that will be more multi-functional and can be transformed quickly into spaces for many different types of programs several times a day. These changes and an updated modern look to the facility will allow us to serve the community even better than we are today.” said Parkevich. The Y currently serves nearly 4,000 members and another 2,000 individuals in its programs throughout the year.