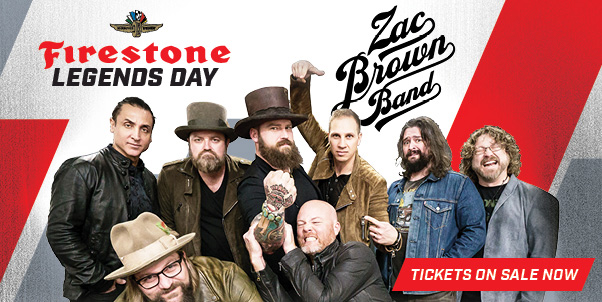 Last Updated on January 8, 2019 by cassnetwork

INDIANAPOLIS – Multi-platinum, Grammy Award-winning Zac Brown Band will headline the Firestone Legends Day Concert on Saturday, May 25 at the Indianapolis Motor Speedway, one day before the 103rd Indianapolis 500.

The concert, which also will feature additional acts to be announced in the coming weeks, starts at 3:30 p.m. on the Firestone Stage inside Turn 4 of the IMS oval.

Tickets are on sale now at IMS.com, by calling 800-822-INDY or 317-492-6700, or by visiting the IMS Ticket Office at the IMS Administration Building. General admission tickets start at just $35 until March 1. A limited number of Concert Pit tickets are available starting at $75, and a very limited supply of exclusive VIP Deck tickets are available for $250.

All concert tickets include admission to the concert and all Legends Day presented by Firestone activities that day at IMS, including autograph sessions with current and past Indianapolis 500 drivers, the 103rd Indianapolis 500 public drivers’ meeting, historic race car laps and more. IMS gates open at 8 a.m., with concert gates opening at 2 p.m.

“Zac Brown Band is a phenomenon, one of the most exciting, talented and popular live acts in any genre of music today,” IMS President J. Douglas Boles said. “The band’s unique blend of rock, soul, country, bluegrass and reggae has incredible appeal to so many people and reaches a new level when performed live. Race Weekend for the 103rd Indianapolis 500 just keeps getting better and better. Is it May yet?”

Throughout their decade-long career, Zac Brown Band has had five consecutive albums reach the top 10 of the Billboard 200 and four consecutive albums debut at No. 1 on Billboard’s Country Albums chart. To date, the group has won three Grammy Awards, including Best New Artist in 2010, sold more than 30 million singles, 9 million albums, has achieved 15 No. 1 radio singles and is the second act to top both the Country and Active Rock formats.

Zac Brown Band has headlined eight North American tours and currently holds the record for most consecutive sold-out shows at the iconic Fenway Park. Since their debut, Zac Brown Band has developed a reputation with critics and fans alike as one of the most dynamic live performers, marked by strong musicianship that defies genre boundaries.

The addition of Zac Brown Band as the headline act for the Firestone Legends Day Concert builds an even more star-studded lineup of music on Race Weekend for the 103rd Indianapolis 500. Rock legends Foreigner and funk, R&B and pop icons Kool & the Gang are performing at the Miller Lite Carb Day Concert on Friday, May 24, with the electronic music lineup for the Snake Pit presented by Coors Light to be announced soon.

As the Official Tire of Country Music™ and the Official Tire of the Indianapolis 500, Firestone has served as the presenting sponsor of Legends Day since it debuted in 2014. The partnership brings together two platforms – racing and country music – that have played significant roles in the rich history of the time-tested Firestone brand.

The 103rd Indianapolis 500 is scheduled for Sunday, May 26. Tickets are on sale now at IMS.com or by calling or visiting the IMS Ticket Office.