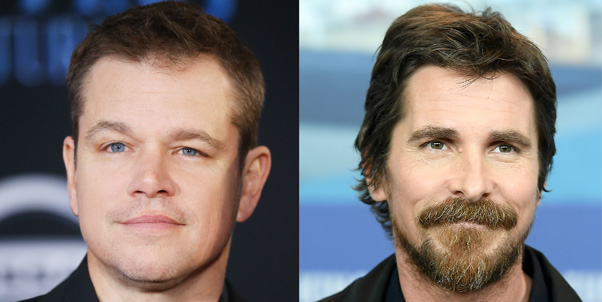 INDIANAPOLIS – Academy Award-winning actors Matt Damon and Christian Bale will serve as honorary starters for the 103rd Indianapolis 500 presented by Gainbridge, waving the green flag to start “The Greatest Spectacle in Racing” on Sunday, May 26 at the Indianapolis Motor Speedway.

Damon and Bale are starring in the upcoming film “FORD v FERRARI” from 20th Century Fox, the remarkable true story of the visionary American car designer Carroll Shelby (Damon) and the fearless British driver Ken Miles (Bale), who together battled corporate interference, the laws of physics and their own personal demons to build a revolutionary race car for Ford Motor Company and take on the dominating race cars of Enzo Ferrari at the 24 Hours of Le Mans in France in 1966.

“The Indianapolis 500 is the largest single-day sporting event on Earth, so it’s fitting that global icons Matt Damon and Christian Bale will be in the flag stand on May 26 to send the field of 33 cars charging toward Turn 1,” IMS President J. Douglas Boles said. “Matt and Christian are used to performing in the brightest spotlight so we know they will enjoy this special role at the world’s greatest race.”

Damon rose to prominence in 1997 with his role as Will in “Good Will Hunting,” a film for which he shared the Academy Award and Golden Globe for Best Screenplay in 1998.

Bale first grabbed audiences’ attention with his role in “Empire of the Sun.”

Wales native Bale has received critical acclaim for his work in such films as “American Psycho,” “Batman Begins,” “The Dark Knight,” “The Dark Knight Rises,” “3:10 To Yuma” and many more. He won the Academy Award and Golden Globe Award for Best Supporting Actor for his portrayal of Dicky Eklund in “The Fighter.” He was nominated for an Academy Award for his roles in “The Big Short,” “American Hustle” and “Vice,” for which he won the Golden Globe for Best Actor.

Visit IMS.com to purchase tickets for the 103rd Indianapolis 500 presented by Gainbridge and for more information on the complete month of May schedule at IMS.

The race will be televised live on NBC for the first time, with the pre-race show starting at 11 a.m. (ET). The green flag is scheduled for 12:30 p.m.