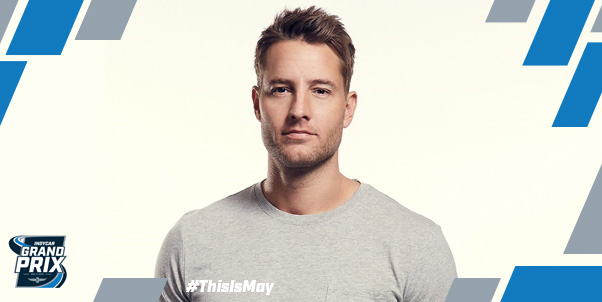 INDIANAPOLIS – Actor Justin Hartley, who stars in NBC’s acclaimed series “This Is Us,” will serve as honorary starter for the INDYCAR Grand Prix on Saturday, May 11 at the Indianapolis Motor Speedway.

Hartley plays the role of Kevin Pearson in “This Is Us,” which chronicles the Pearson family across the decades: from Jack (Milo Ventimiglia) and Rebecca (Mandy Moore) as young parents in the 1980s to their adult kids – Kevin (Hartley), Kate (Chrissy Metz) and Randall (Sterling K. Brown) – searching for love and fulfillment in the present day. This grounded, life-affirming dramedy reveals how the tiniest events in our lives impact who we become, and how the connections we share with each other can transcend time, distance and even death.

Illinois native Hartley is part of the “This Is Us” cast that earned the Screen Actors Guild Award for Outstanding Performance by an Ensemble in a Drama Series in 2018 and 2019. The series also has won many other awards, including a 2016 Critics Choice Television Award and 2017 Television Critics Association Award. It was nominated for the Outstanding Drama Series Emmy Award in 2016 and 2018.

“Justin will enjoy the thrill of a lifetime sending a charging pack of NTT IndyCar Series stars toward Turn 1 from the flag stand during the INDYCAR Grand Prix,” IMS President J. Douglas Boles said. “We’re honored to welcome him to the Speedway, as ‘This Is Us’ is such a widely acclaimed, popular show. His presence is yet another example of the wonderful partnership that’s growing between IMS, INDYCAR and NBC as NBC Sports broadcasts the INDYCAR Grand Prix and the Indianapolis 500 presented by Gainbridge live for the first time this month.”

Visit IMS.com to buy tickets or for more information about the INDYCAR Grand Prix and all other events during the Month of May at IMS.