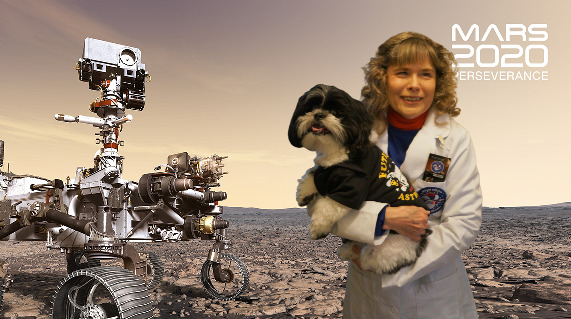 By Solar System Ambassador Pam Roller, pictured above with her Astro-Pup, Patches

The successful launch on July 30th sent NASA’s Mars Rover Perseverance on a seven-month journey to the Red Planet. Perseverance is expected to land on Mars around noon EST on February 18, 2021. It will land about 290 million miles from Earth at Jezero Crater to search for signs of ancient microscopic life; it will investigate rocks along an ancient lake bottom, and it will collect samples to return to Earth. It was important to get this mission launched due to the current alignment of the Earth and Mars. The launch window of opportunity would have expired on Aug. 15th, and that would have meant waiting two more years before the next possible alignment. Like, everything else, COVID-19 threatened that timeline with great challenges.

The Mars Rover Perseverance is healthy, and is now on its way to Mars.

However, there were two operational issues to persevere during launch operations. The first issue was after launch, the proximity of the spacecraft to Earth was saturating the ground station receivers of NASA’s Deep Space Network. Jet Propulsion Laboratory’s amazing controlling team detuned the receivers and pointed the antennas slightly off-target from the spacecraft to bring the signal within an acceptable range. Quickly applying prepared mitigation strategies; the spacecraft was in lock on telemetry.

The second obstacle it overcame was when the spacecraft entered into the Earth’s shadow; the Sun was temporary blocked by Earth, a sensor indicated that part of the spacecraft was slightly colder than expected. After placing it on an interplanetary trajectory, the spacecraft transitioned into safe mode. All but the essential systems were turned off until receiving new commands from mission control. Fortunately, after several hours, the Flight Controllers for the Mars Rover Perseverance were able to successfully return the spacecraft to nominal flight operations.

During these difficult times, we must not quit striving to achieve our goals and dreams. We too, should never quit or give up hope no matter what situations or circumstances we’re facing; we also must persevere!