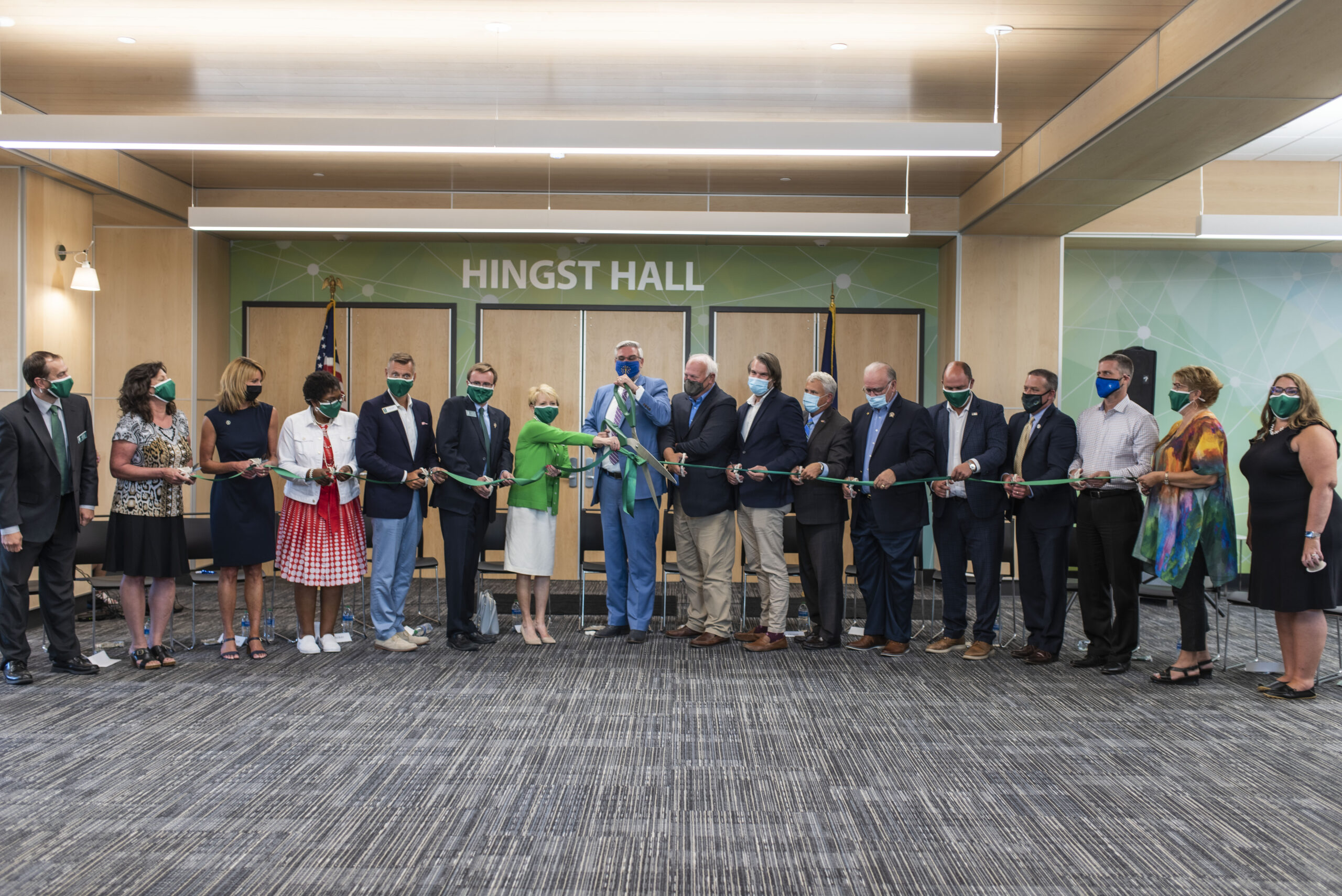 KOKOMO, Ind. – Ivy Tech Community College celebrated several milestones Wednesday at a dedication and ribbon-cutting ceremony at its Kokomo Campus at 1815 E. Morgan St. The event included the announcement that community support for the project has topped the $3 million goal set for THE TIME IS NOW Campaign to successfully complete the $43 million transformation of the campus.

“We are excited to announce that with the leadership of our campaign committee, made up of a number of business and government leaders and community volunteers, we have exceeded our $3 million cash fundraising goal,” said Ivy Tech Kokomo Chancellor Dean McCurdy. “With their support, and the support of 254 different donors from faculty, staff, students, and Ivy Tech’s many friends, we have raised $3,104,743. That’s 103.5 percent of our goal!”

Today’s ceremonies were timed to coincide with meetings at the Kokomo Campus of the Ivy Tech Community College State Board of Trustees and the Ivy Tech Executive Council, which includes chancellors from all 19 campuses as well as President Sue Ellspermann and her cabinet. Gov. Eric Holcomb, State Sen. Jim Buck, and State Reps. Michael Karickhoff and Heath VanNatter joined a number of local government and business leaders, members of the Kokomo Campus Transformation Campaign fundraising committee, and other supporters of the project in officially opening the new campus and dedicating it to the students and communities it serves.

Over the last 36 months, Ivy Tech’s Kokomo Campus has undergone a long-awaited transformation funded by a $40 million appropriation by the Indiana General Assembly approved in June 2017 and this $3.1 million in philanthropic support.

“This $43 million project represents the second largest investment the state has ever made in Howard County (second only to the new U.S. 31 bypass),” McCurdy said in thanking the governor and the state legislators who championed the initiative. “It changes everything for Ivy Tech and the way we serve our students and community.”

McCurdy said the project is the realization of Ivy Tech’s goal to bring students and community partners together in a unified, expanded, updated and efficient campus. Bringing all instruction into four adjacent buildings, the campus’s new spaces include Hingst Hall, Ivy Tech’s new community room; a student fitness center and campus walking path (around a relocated community garden); and a central quad adding green space and connecting sidewalks. There are new classrooms and laboratories, student lounges, conference rooms, and faculty and staff offices – even a new trolley stop – that add to the student’s educational experience at the new regional Campus, he added.

Karen McLean, public affairs and economic development manager at NIPSCO and Ivy Tech regional trustee who is also a 1989 graduate of Ivy Tech Kokomo, has served as chair of the campaign leadership team. She said the project has redefined Ivy Tech as an educational leader, economic development power, and innovator in meeting workforce needs in north central Indiana.

“Thank you to all the donors who made the Kokomo Ivy Tech Campus Transformation a reality,” she said. “The incredible impact and growth opportunities for the regional students, workforce, and communities will be realized for generations to come. And congratulations to the Ivy Tech Capital Campaign team of community leaders and the Ivy Tech staff and faculty who all worked so hard to make the dream of this campus transformation come true.”

Campaign committee member Rick Smith added his appreciation, saying, “Thanks to the many philanthropic hearts in our community, the citizens of Kokomo and the surrounding area now have access to state-of-the-art educational facilities that provide advancement into a promising future right here at home.”

Kelly Karickhoff, executive director of resource development for Ivy Tech’s Kokomo Service Area who led staffing for the campaign, talked about the generosity of community members.

“We live in a generous community and when community members can see the need, they rise to the occasion,” she said. “Donors to the Kokomo Campus Transformation Project could see our vision. They could see the impact this project would have on student success and they are excited to be part of Ivy Tech Kokomo’s future.”

Karickhoff said the campaign team worked together to exceed the $3 million goal.  “Donors made sacrificial gifts because they believe that higher education changes lives,” she continued. “We are grateful to our donors who made all of this possible. They have become a part of our Ivy Tech family and our transformational story.” She noted the Ivy Tech’s Kokomo Service Area includes Cass, Fulton, Howard, Miami, Pulaski, and Tipton counties.

Plans are under way for several additional events to celebrate the completion of the campus. A community open house is set for Saturday, Sept. 18, from 1 to 4 p.m. to officially unveil the new campus at 1815 E. Morgan St. The entire community is invited to come for a tour of the new facilities along with educational demonstrations, games, and refreshments.